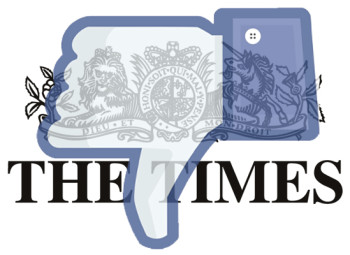 The Times of London invaded the privacy of a random woman when reporting on a a man charged with murder in Hong Kong.

Publishing a photo from Facebook of the woman with the subject of the article, Rurik Jutting, from nearly a decade ago wasn’t in the public interest. Jutting is accused of killing two Indonesian women in Hong Kong last year.

The photo was the largest of three images of Jutting that were published in the newspaper. The caption read: “Rurik Jutting as a Cambridge student at 21, with a friend.”

“The article contrasted the student days in England of Rurik Jutting with the circumstances of his recent arrest for murder in Hong Kong,” IPSO reported.  All but the first few sentences of the article are behind a paywall, iMediaEthics notes.

The woman in the photo complained to the newspaper, saying she worked with Jutting back in 2006 when the photo was taken and it was taken at a “private event in the enclosed grounds of a college.” Therefore, she argued, “she had a reasonable expectation of privacy,” IPSO reported. She didn’t post the photo on Facebook nor was she aware that it had been posted by a friend who didn’t have privacy settings. Further, the woman hadn’t had contact with Jutting since around the time of the photograph.

The Times defended the photo and its reporting as in the public interest. “The photograph served to illustrate the apparent transformation of his circumstances,” IPSO reported the newspaper said. Further, The Times noted the photo itself was “innocuous” and “publicly accessible.”

The Times did unpublish the photo and apologized following the woman’s complaints. But IPSO ruled the paper also needs to publish its ruling.

“Relatives or friends of persons convicted or accused of crime should not generally be identified without their consent, unless they are genuinely relevant to the story,” IPSO’s code dictates.

IPSO ruled that the photo and article “asserted a direct association” between the woman and Jutting. “Regardless of the true nature of their connection, the caption to the large and prominent photograph described the complainant as a ‘friend” of Mr Jutting,'” IPSO ruled.

“She was plainly not personally relevant to the story,” IPSO wrote. “No public interest could reasonably be regarded as justifying the intrusion into the complainant’s life caused by so prominently and publicly associating her with an alleged criminal.”

iMediaEthics has written to The Times for comment and attempted to reach the woman in question.