Urgency No Excuse for Inaccuracy 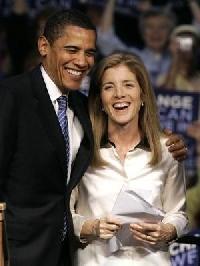 An anonymous source gave the NY Times false information about Caroline Kennedy. The Times published the attack without verifying facts. Their excuse was the rush to beat competitors.

Clark Hoyt, public editor of the NY Times, says the rush to beat competitors caused Times reporter Danny Hakim to quote an anonymous source’s false statements. This failure to verify resulted in The Times playing a major role in a “nasty political attack” on Caroline Kennedy.

The Poynter Institute’s Bob Steele also weighed in.  “Competitive fervor is not a justifiable ethical value,” he said.

Here’s what happened: Times reporter Danny Hakim quoted an “anonymous source” in an article about Caroline Kennedy’s withdrawal of her bid to take over Hillary Clinton’s senate seat. The first revision came just 34 minutes after it was first posted. The lengthy quote attacking Kennedy was shortened to a paraphrased sentence.

The Times’s standards editor, Craig Whitney, said by quoting the source, Hakim had violated a written newspaper policy: “We do not grant anonymity to people who use it as a cover for a personal or partisan attack.” While Hakim and his editors say they were comfortable using a single source anonymously because the source was so close to the governor, Kathleen McElroy, the deputy in charge of the continuous newsdesk, said she regrets letting the quote go and blamed the error on a “sense of expediency because it’s a very competitive story.”

Yet another problem readers picked up on: the article doesn’t clarify or explain the headline, “Taxes and a Housekeeper Are Said to Derail Kennedy’s Bid.” Neither the original or the revised version explain what taxes or a housekeeper had to do with Kennedy’s withdrawal. It was several more revisions over the course of the day before more weight, background, and other sources – skeptical of the original source – were added to the story.

“What happened in this case is that normal news reporting, in which a story changes in content, tone and emphasis as more is learned, played out in front of the whole world, instead of in the newsroom before publication,” Hoyt says.

In a subsequent article, the Times explained what happened in the aftermath of Kennedy’s withdrawal, saying Judith Smith, Paterson’s top communications strategist, released confidential information and told staff to call reporters and spread false statements. In essence, the Hakim failed to verify the allegations before posting the article on the Times’ website.

Hoyt says that, while the second article sheds light on the catty nature of politics, it should also acknowledge the Times’ role in forwarding the attack.