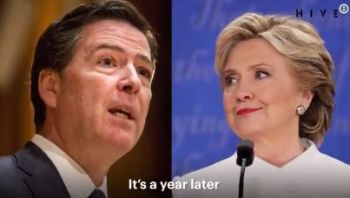 A screenshot from the Vanity Fair video.

Vanity Fair published a video suggesting New Year’s resolutions for Hillary Clinton, including taking up knitting or “literally anything” instead of running for political office. Readers and viewers reacted, calling the video sexist.

In a statement sent to iMediaEthics by the magazine’s Executive Director of Communications Beth Kseniak , Vanity Fair said the video was “an attempt at humor and we regret that it missed the mark.”

One of the Vanity Fair employees featured in the video, Maya Kosoff, tweeted that the video was “taken out of context to make me seem super sexist.” Kosoff also noted that the magazine “made silly new years resolutions for a bunch of politicians,” the Washington Post reported. Kosoff has since made her Twitter account private.

Pres. Donald Trump weighed in on the apology, tweeting this morning that the magazine “is bending over backwards in apologizing for the minor hit they took at Crooked H.”

Deadline.com transcribed the resolutions for Clinton:

It’s time to start working on your sequel to your book, “What Happened”: “What the Hell Happened.”

Get someone on your tech staff to disable autofill on your iPhone so that typing in “F” doesn’t become “Form Exploratory Committee for 2020.”

You know how on Anderson Cooper you were telling him about alternate-nostril breathing? You seemed really adept. You should try teaching a class.

Take more photos in the woods. How else you are going to meet unsuspecting hikers?

Take up a new hobby in the New Year: Volunteer work, knitting, improv comedy – literally anything that will keep you from running again.

Put away your James Comey voodoo doll. We all know you think James Comey cost you the election, and maybe he might have, but so did a handful of other things. It’s a year later and time to move on.

Maybe it's time for Hillary Clinton to take up a new hobby in 2018 pic.twitter.com/sbE78rA5At

Vanity Fair, which looks like it is on its last legs, is bending over backwards in apologizing for the minor hit they took at Crooked H. Anna Wintour, who was all set to be Amb to Court of St James’s & a big fundraiser for CH, is beside herself in grief & begging for forgiveness!