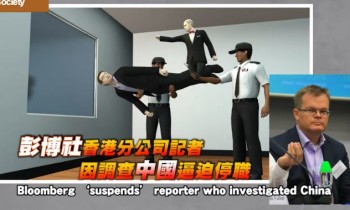 Michael Forsythe confirmed on Twitter this week that he is no longer with Bloomberg News.

I can confirm that I have left Bloomberg News. That’s all I’m going to say for now.

The New York Post had reported last week that Forsythe, a “reporter at large” at Bloomberg News in Hong Kong,  was put on unpaid leave after being identified as one of the New York Times’ anonymous sources in a report on Bloomberg News.  We asked Bloomberg News by e-mail about the Post’s claims of Forsythe’s punishment for leaking to the Times. On Saturday night, Bloomberg News told IMediaEthics by e-mail it declined to comment..

As iMediaEthics wrote over the weekend, the Times had reported, based on anonymous sources with Bloomberg News in Hong Kong, that the organization was self-censoring its reports on China. Bloomberg News denied the Times report.

Separate to note: Taiwan’s Next Media Animation, a computer animation studio that creates animated video illustations to tell news and pop culture stories, produced a brief animation about Bloomberg News’ suspension of Forsythe.  Check it out.

The New York Times reported back in 2011 that some of the company’s animations have been criticized for the way people are portrayed.