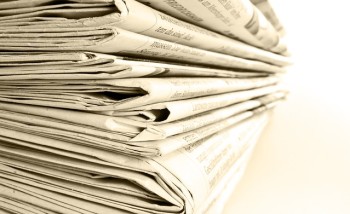 But the Daily News wasn’t the only U.S. newspaper to slap graphic photos on its front page today, but it did certainly feature the most graphic images.  iMediaEthics flipped through Newseum’s front pages this morning.

The New York Post, infamous for its seconds-before-death 2012 image of Ki-Suck Ha, a man pushed onto the subway tracks, published a still image from the Virginia gunman’s video of the murders.  The image shows Parker holding a microphone unaware of the gun pointed directly at her. The Post‘s headline reads “Gunman shoots journalists during live broadcast: TV MURDER.”

The Sumter, South Carolina Item, the Norman, Oklahoma Transcript and the Greensburg, Pennsylvania Tribune Review all used a picture from the gunman’s point of view, showing the gun pointed over the shoulder of cameraman Ward directly at Parker.

In iMediaEthics’ view, news outlets shouldn’t use images from the gunman’s own video of the murders. It amounts to propaganda and gives the now-dead murderer what he wanted — attention he clearly sought.

The Staunton, Virginia News Leader used a still image from the WGBJ camera video, showing a blurry gunman pointing a gun directly at the camera.

The Independent noted “The Independent and its sister titles, the i paper and i100.co.uk have chosen not to publish the images, either in print or online.” The newspaper’s deputy managing editor Will Gore was quoted:

“How to cover such a horrible – and very public – crime raises difficult questions for the media. After numerous discussions in The Independent’s offices on Wednesday, the view was taken that we should avoid images and footage taken by Bryce Williams. Similarly, we did not show images which depicted Alison Parker’s face after the shooting began.

“It was a tough call, balancing the need to show a proper degree of compassion with the journalistic duty not to over-sanitise. I hope readers will feel, on the whole, that we got that balance about right.”

On the other hand, Poynter’s Kristen Hare collected front pages that didn’t use graphic murder images and instead featured the victims.