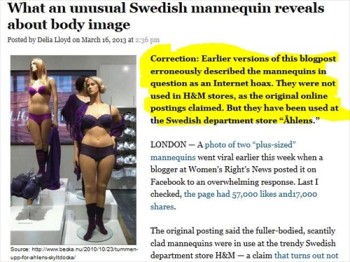 Lloyd had blogged about “a photo of two ‘plus-sized’ mannequins” and the implications for body image and the “push back against the anorexic ideal.”

But, Lloyd originally said that the mannequins in the photo were a hoax, which is wrong. Her blogpost’s hyperlink reveals that the original Post story was headlined: “What a Swedish Mannequin Hoax Reveals about Body Image.”

According to the Washington Post’s correction:

“Correction: Earlier versions of this blogpost erroneously described the mannequins in question as an Internet hoax. They were not used in H&M stores, as the original online postings claimed. But they have been used at the Swedish department store ‘Åhlens.'”