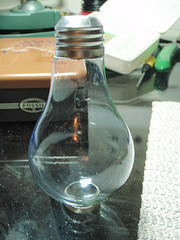 A June 7 Wall Street Journal editorial contradicted its own earlier report on what choices consumers will have in buying “conventional” 100-watt light bulbs.

The editorial claimed that a 2007 law will force consumers to buy only one type of light bulb beginning in 2012, when the law goes into effect. After 2012, consumers will have to buy compact fluorescent lights (CFLs), according to the editorial.

But, the editorial’s claim contradicts a June 1 report by the Wall Street Journal’s Gwendolyn Bounds, who reported that consumers could choose from “three main alternatives” to the traditional, but soon-to-be phased out light bulbs, according to progressive media watchdog Media Matters.  Those alternatives are halogen-incandescent, light-emitting diodes (LED) and CFLs bulbs, according to Bounds.