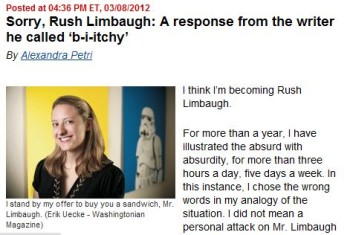 In her original March 7 column, “Rush Limbaugh’s show targets jerks, judging from the latest ads,” Petri reported that two of Limbaugh’s new advertisers are “AshleyMadison.com, the site where you go to cheat on your wife, and another Web site that is explicitly for sugar-daddy matchmaking.” Further, Petri noted that “46 [advertisers] have departed” Limbaugh’s show after Limbaugh called Georgetown Law student Sandra Fluke a “slut.”

However, after Limbaugh criticized the column March 8 on-air, she published a March 8 apology to Limbaugh, to which she linked her original column.   Limbaugh said in his March 8 program that the “Washington Post runs out-and-out lie.”  Limbaugh denied that he has accepted the advertising and said

“Ms. Petri, I don’t know who feeds you your information — I have a pretty good guess — but you might want to double-check here because you’ve written something that’s patently false, it’s an out-and-out lie complete with your b-i-itchy opinion in it, and it is untrue.  We are not running commercials.  We wouldn’t accept commercials.  We have rejected their offers from outfits that do this kind of thing, provide a way for you to cheat on your spouse.  We have never knowingly had this company in our program.”

Limbaugh added that “there are two ways you can get on this program:” by sponsoring it or getting “commercial time on one of our local affiliates and become one of  18,000-plus advertisers that we will never know about.”

“My piece yesterday stating that AshleyMadison.com and SeekingArrangement.com were the only new companies to be advertised on Rush Limbaugh’s show was wrong. They want to be on his show, but Limbaugh said today that he won’t let them.”

Petri explained that Limbaugh said he “prevented” these companies from advertising on his show.  Regardless of that correction, Petri argued that “the whole point of the piece was that the people most eager to be associated with Rush Limbaugh’s show are — well, advertisers seeking jerks. This has not changed.”

The Washington Post’s Pexton wrote that he “was glad to see” the apology from Petri and called Limbaugh’s reaction on air to her article “rude, boorish, unkind and bombastic” as well as inaccurate.  Pexton clarified that despite Limbaugh’s claims that she is a “so-called reporter” with a “news story,” Petri is a columnist.

However, Pexton added that he “wouldn’t have done” his apology in a humorous way as Petri did because “I think corrections and apologies should be sober and heartfelt. Some of Limbaugh’s fans felt Petri’s apology was half-hearted.”