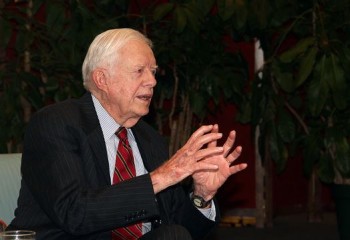 The New York Times editorial board stands on a press release from The Carter Center that crumbles beneath them as the newspaper failed to fact-check the release or ask the Egyptian government questions about the center for due diligence steps.

When The Carter Center sent a letter to the Egyptian Foreign Ministry that it “officially closed” its office, the date was Aug. 31, 2014.

Without one word of complaint or even mild disappointment, the letter stated:

“At this time, The Center is redirecting its resources to observe electoral events in other countries around the world … Again, we thank you for your kind cooperation over the years.”  [Read the letter in full] So why did a recent Carter Center press release — one that the New York Times editorial board relied on from seven weeks later — claim that the center closed on October 15, 2014?

Most troubling, the press statement asserted a litany of political failings dooming the upcoming Egyptian parliamentary elections as the reason it closed its office, without mention of the Aug. 31 official closing letter that stated the reason was a shift in financial priorities. Its Oct. 15 press release, in contrast with the Aug. 31 letter, states:

“The Carter Center announced today that it has closed its field office in Egypt after nearly three years and that it will not deploy an observation mission to assess Egypt’s parliamentary elections anticipated later this year. This decision reflects The Carter Center’s assessment that the political environment is deeply polarized and that political space has narrowed for Egyptian political parties, civil society, and the media.”

The misleading information in The Center’s press release — that it closed in October, not August, and that the reason was democratic repression, not a “redirecting [of] its resources” to other countries after already helping Egypt with five elections — was used as a platform for the New York Times editorial board to then list everything it views wrong with Egyptian politics, from imprisoned journalists to protest laws that require permits.

The Times editorial, “From Jimmy Carter, a Rebuke to Egypt,” states:

“Over three decades, the Carter Center in Atlanta, led by former President Jimmy Carter, has established itself as a respected advocate for human rights and democracy … it has thrown in the towel on Egypt.

“In a statement last week, the center announced that it would close its Cairo office after nearly three years and would not send experts to monitor parliamentary elections later this year.”

The editorial concludes: “The center’s withering judgment is a damning critique of Abdel Fattah el-Sisi…” Then, it launches into Egyptian political criticisms. 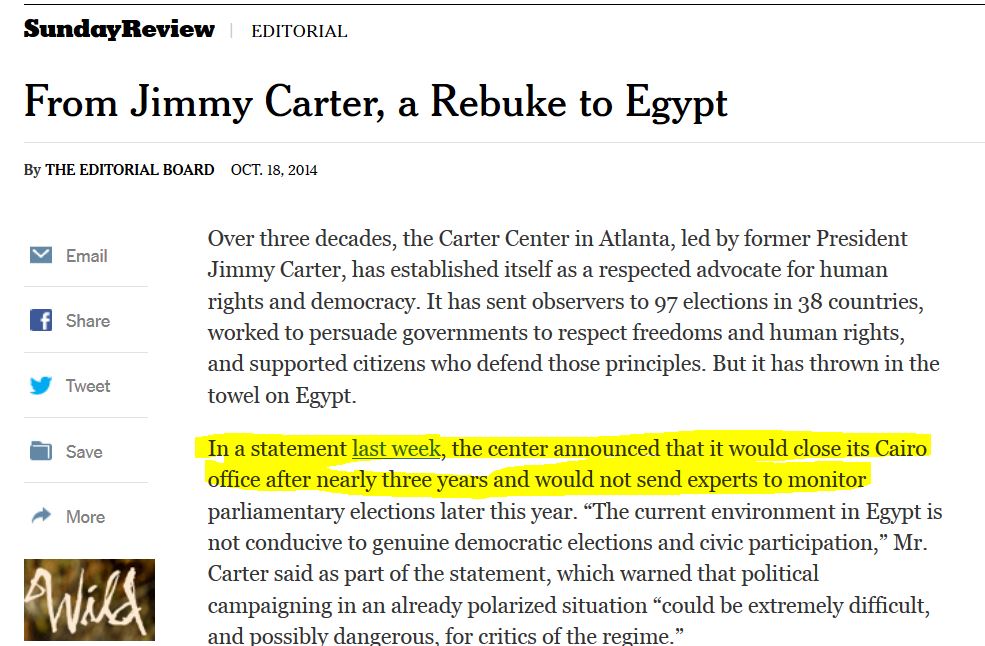 The Egyptian Foreign Ministry said The Times failed to contact it for comment before publishing the editorial. The Carter Center did not respond to iMediaEthics’ multiple phone calls and e-mails by publication time. We continue to call today but no return calls or emails from the center.

The Times declined by email to comment on our questions. We asked for verification that the Times didn’t contact the ministry before its Carter Center editorial and whether The Carter Center informed them of the Aug. 31 letter to the Ministry of Foreign Affairs for Egypt offering reasons for its leaving Egypt, other than the ones the Times presents to its readers.

Finally, iMediaEthics asked the Times if it planned to issue a clarification or correction. In iMediaEthics’ view, the premise of its editorial is gutted if indeed The Carter Center closed in Egypt as it said when it declared itself officially shut for administrative reasons.

The Times editorial is apparently based on the Carter Center’s press release.

Did the New York Times fact check with Egypt? Did it give Egypt an opportunity to respond before publication just in case there are mitigating facts –such as this now-embarrassing Aug. 31, 2014 letter from The Carter Center? Were there any letters following Aug. 31, where The Carter Center did cite complaints like in its press release that the “Center filed required documentation for registration with the Ministry of Foreign Affairs but never received formal registration”?

“Are you sure?” iMediaEthics asked. “No other letters?”

“I’m the spokesperson, no”…“Nothing, Nothing.”

UPDATE: 3:05PM EST – iMediaEthics continues to call media representatives of the Carter Center but have received no response.