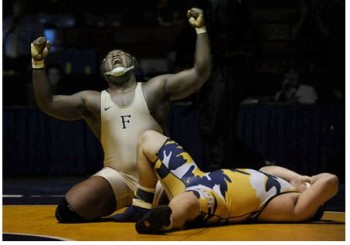 The WHNPA said the above is the altered photo entered in its contest. (Credit: Washington Post/WHNPA)

A Washington Post photographer submitted a photo that had been Photoshopped to hide a person in the background of the image to the White House News Photographers Association’s annual awards. The un-altered photograph had originally been published in the Washington Post last year.

Because of that doctoring, the photograph — Tracy Woodward’s “State Champion” — was “immediately disqualified” from the awards contest, according to a Feb. 25 report on the WHNPA’s website. The WHNPA noted the photo had won the “Award of Excellence in the 2013 WHNPA ‘Eyes of History’ stills photo contest in the Sports Feature/Reaction category.” As Imaging-Resource.com explained of the Photoshop:

“The obvious edit is that a referee in the background has been substantially darkened, so as to remove him from the action.”

The Washington Post‘s Communications Director Kris Coratti told iMediaEthics by email that the photograph was submitted by Woodward and said the newspaper didn’t know the photo had been altered before its submission.  “Once we found out we contacted the WHNPA and had it withdrawn,” Coratti said.

iMediaEthics asked if this incident will affect Woodward’s relationship with the Washington Post, but Coratti only said:

“The Post’s ethics policy prohibits manipulation of photographs, and we have taken action in accordance with that policy.”

According to the WHNPA statement, its guidelines prohibit Photoshop outside of minimal “adjustments” including “cropping, dodging and burning” and “normal toning and color adjustments that restore the authentic nature of the photograph.” Specifically:

“No element should be digitally added to or subtracted from any photograph and the image must be a truthful representation of whatever happened in front of the camera during exposure.  Retouching to eliminate dust and scratches is acceptable.”

A Feb. 25 story from the National Press Photographers Association’s website reported that the Washington Post found out about the Photoshop and tipped off the WHNPA. Post Photography Director MaryAnne Golon is quoted as saying over the weekend:

“A Washington Post photographer entered an altered photograph to the WHNPA contest. Once Post editors saw that it had been altered from what had originally been published in The Post, we withdrew the photo from consideration. The Post’s ethics policy prohibits the manipulation of photographs, and we have taken action in accordance with that policy.”

Later, Golon reportedly said the Washington Post is “taking action that is consistent with our photo manipulation policy.”

iMediaEthics has written to Washington Post ombudsman Patrick Pexton asking if he will address this issue in his last days in office. An email has also been sent to the WHNPA asking when the last time photo manipulation ended a contest entry’s chances.  We’ll update with any responses.