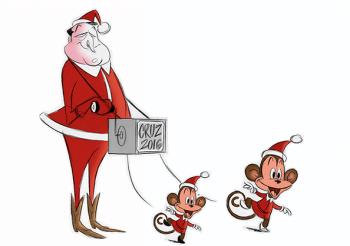 The Washington Post unpublished an editorial cartoon of presidential candidate Ted Cruz and his daughters.

In a statement from editorial page editor Fred Hiatt posted in place of the cartoon, Hiatt said the cartoon shouldn’t have been published. “It’s generally been the policy of our editorial section to leave children out of it,” Hiatt wrote. “I failed to look at this cartoon before it was published. I understand why Ann thought an exception to the policy was warranted in this case, but I do not agree.”

Cartoonist Telnaes wrote with the cartoon, according to The Hill: “When a politician uses his children as political props, as Ted Cruz recently did in his Christmas parody video in which his eldest daughter read (with her father’s dramatic flourish) a passage of an edited Christmas classic, then I figure they are fair game.”

Cruz had complained on Twitter about the cartoon’s inclusion of his children. “Classy. @washingtonpost makes fun of my girls. Stick w/ attacking me–Caroline & Catherine are out of your league.”

Classy. @washingtonpost makes fun of my girls. Stick w/ attacking me–Caroline & Catherine are out of your league. https://t.co/N61ys6z8w1

Cruz also sent out fundraising e-mails based on the cartoon, Gawker noted.

“This shows you EXACTLY how desperate the liberal media is to attack and destroy me (and my family) by any means necessary,” Cruz’s e-mail said. Another one asked for “emergency” donations to pull in $1 million in 24 hours.

Thank you, @marcorubio Appreciate the kind support. We're both Dads of young kids, and it's hard enough on them. https://t.co/8bBtHgxv3M

Before the cartoon was deleted, Telnaes tweeted “Ted Cruz has put his children in a political ad- don’t start screaming when editorial cartoonists draw them as well.”

Ted Cruz has put his children in a political ad- don't start screaming when editorial cartoonists draw them as well. https://t.co/7hafBacOiK