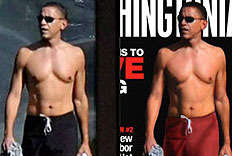 A recent Washingtonian magazine cover featuring a photoshopped picture of President Barack Obama has some bloggers and commentators up in arms over the liberties the magazine has taken as well as its message.

The photo, which was taken by paparazzi during the President’s post-election vacation in Hawaii last December, features a chiseled Obama in his bathing suit, which was inexplicably altered from black to red.  The photo was a teaser for an article in the magazine’s May issue titled “26 Reasons to Love Living Here” and featured the caption “Our new neighbor is so hot.”

According to Washingtonian political reporter Garrett Graff, the doctored photo was meant to add flair to the magazine’s cover. He told AFP: “We were trying to capture in the cover image what makes it so cool to be here right now, and the real reason is that our new neighbor is hot,” said Graff.  “We mean it on the cover in a tongue-in-cheek way and in the article inside we mean it in the sense that Obama has made Washington cool, has made government cool.”

Moeller likened the alteration to a 1994 Time magazine cover that darkened O.J. Simpson’s skin so he appeared more sinister. She said, “What’s the danger of an audience thinking that the president looks model-hot? It’s a simplification of who he is–it’s the photographic version of presenting Obama as the shining hope for the country. It’s ascribing to him more power–even if the power is sexual–than he actually has,” says Moeller, who fears the consequences of photos like this are that the public will hold unrealistic expectations of the president and face disappointment.

According to a National Press Photographers Association press release in 2005 condemning similar photo tricks used on an image of Martha Stewart: “The public often distrusts the media and this just gives them one more reason. This type of practice erodes the credibility of all journalism, not just one publication.”

In the press release, NPPA Ethics Committee chairperson John Long stresses that those who portray images are just as accountable as writers to present the truth in their work: