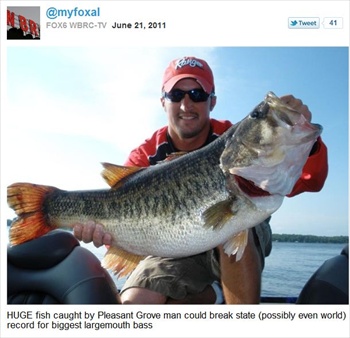 WBRC aired this photo of James Caldemeyer, submitted by Alabama man Joshua Hand as if it were Hand. The station has since admitted it was hoaxed. (Credit: Twitpic)

An Alabama Fox TV news station was hoaxed by a viewer who submitted a photo as a prank in honor of the recently killed star of MTV show Jackass, Ryan Dunn.

Alabama Fox affiliate-WBRC station had called for viewers to submit pictures of “their fishing and hunting trophies,” according to Field and Stream.  Viewer Joshua Hand, from Argo, Alabama, submitted a photo of “fishing guide James Caldemeyer and a big bass” about 14 pounds, as if it were a photo of Hand with a fish he caught.   Hand also posted the photo as his Facebook profile photo.

The trick photo can be seen here on WBRC’s TwitPic account. The fish only looks so large due to an optical illusion called, “forced perspective.” StinkyJournalism has written extensively about this photo trick often employed by hunters and fishermen. See our investigation here of the “monster pig” hoax that fooled the media world-wide in 2007.

WBRC aired the photo of the man holding a fish, which Hand said was 24 pounds, not knowing it was fake or that it would gain so much attention, according to Field and Stream.  A largemouth of that size would break world records.

After the fish photo aired, viewers commented on Facebook about the fish’s size and its potential to break records. It appears the fish photo first aired on WBRC on June 20. Before the hoax was determined, one viewer weighed in on WBRC’s Facebook page to note that if the fish was legitimate, it would break the world record for largemouth bass.

In a Facebook posting June 21, WBRC commented that if Hand’s 24 pound 3 ounce largemouth bass was “verified” the fish would set a “new state record!”

Readers commented about the fake photo on WBRC’s Facebook June 21.  One reader, Kyle Grayson, called it a “fake” and another, Al Stringfellow noted “this same picture is on www.officiallakeforktrophybass.com out of Lake Fork, Texas caught by James Caldemeyer at Lake Fork who owns the site.”

That photo (see here) is used on the top of the website as an icon.

Later, in the comments of that posting, WBRC confirmed that the fish photo is a hoax and provided a link to the station’s follow-up story. WBRC also posted a separate update on Facebook about the fish being a hoax. “Sorry, fish fans–just confirmed that the 24 pound largemouth bass in this photo is a HOAX. More details coming. http://twitpic.com/5es14b”

In a June 21 follow-up story, WBRC reported that the fish was a hoax because “the picture … turned out to be of a fishing guide from Texas holding a 14 lbs fish.”

Another WBRC story about the fish appears to have been removed and replaced with the hoax report.

Field and Stream reported that Hand submitted the photo as a prank in Dunn’s honor, as evidenced by Hand’s post on Facebook: “That prank was for you Ryan Dunn…..R.I.P.”

StinkyJournalism wrote to James Caldemeyer, the man pictured in the photo.  Caldemeyer said he hasn’t had any contact with Hand or WBRC about the photo hoax and that he’s “disappointed” by the hoax.

“I will say that I am disappointed that someone would use my photo in such a manner and even more disappointed that WBRC aired the story and photo without verification of authenticity. You would think they would have done their homework a little better considering a catch of that size would be a new world record.”