What Do Ground Zero Mosque-and-Muslim Media Polls Tell Us ?

What Do Ground Zero Mosque and Muslim Media Polls Tell Us ? 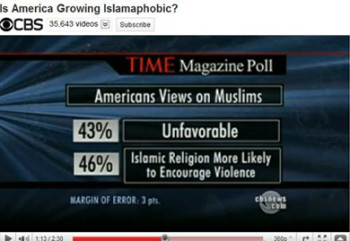 This screenshot of a CBS News report posted on YouTube, shows that recent polls have been framed to question if America is growing Islamophobic. (Credit: YouTube, CBSNews)

“Ground Zero” Mosque and Muslim media polls tell us what?That a majority of Americans are just a bunch of Islamophobes?

So goes the media polling beat about building a mosque and Islamic cultural center near the site of the World Trade Center in New York.

Not surprisingly, we now have a bunch of polls telling us what a lot of politicians and pundits thought they already knew: that solid majorities of Americans, while they think Muslims generally have a right to build a mosque where they want in their local communities, are opposed to building such a place near sacred “Ground Zero.”

One of the first out of the box was a Fox News poll telling us that: “64 Percent Think It’s Wrong to Build Mosque Near Ground Zero.”

A Time Magazine poll conducted a couple weeks later turned up another sizable majority (61%) opposed to the mosque, not to mention a lot of animosity towards Muslims and the religion of Islam more generally.

A CNN poll found an even larger majority riled up about the unthinkable, with two-thirds (68%) opposed to what many pundits refer to as the “Ground Zero” mosque.

A CBS News poll just out (conducted Aug. 20-24) has topped them all, however, with an overwhelming majority (71%) saying it’s “inappropriate” to build it near the September 11 site. See above a detail of a screenshot from CBS News’ polls on the planned structure near Ground Zero.  (Source: CBS News)

But a poll done by the Pew Research Center during almost the exact same time period (August 19-22) finds a razor-thin majority of 51% who object to building an Islamic cultural center and mosque near the site of the destroyed World Trade Center and an American public that is, as they put it, “conflicted over Islam” as opposed to the “growing hostility to the religion of Muslims” that surfaced in the Time Magazine poll. In contrast to the previous CBS News poll, see above Pew’s poll on the development near Ground Zero.  (Source: Pew Research Center)

Well…that’s quite a range of polling results: a slim majority of 51% in the Pew poll to a whopping, near-consensus of 71% in the latest CBS poll. That’s enough to make any of us skeptics about what these Ground Zero Mosque polls are actually telling us.

So are we just a bunch of Islamophobes or not? Are we merely ambivalent and “conflicted” as the Pew poll would have us believe or much more bigoted as other polls would suggest?

As is often the case, a big part of the answer lies with how the questions were worded and sequenced, in particular, how respondents were made aware or “educated” about the Islamic mosque issue.

But, nonetheless, a little later in the same interview, instead of asking what respondents had heard or read about the proposed mosque and what, if anything, they thought about it, they were all brought up to speed on the issue with an instructive preamble and emotionally loaded question: “There is a proposal to build a mosque and Islamic cultural center a few blocks from the site of the World Trade Center in New York City where the September 11th terrorist attacks occurred. Do you think it is appropriate or not appropriate to build a mosque and Islamic center near the site of the World Trade Center? [emphasis mine]”

Acutely reminded of the “terrorist attacks” on September 11, it’s a wonder even more respondents didn’t think it was “appropriate” to build it. Would it not be unpatriotic, as the subtext of the question implies, to say otherwise?

Contrast this with the balanced and nuanced set of questions designed by the Pew Center about the exact same issue. First, they asked respondents about what they knew about the Muslim religion and its practices (55% said they knew either “nothing” or “not much”); about their general opinion of Islam (30% “favorable” vs. 38% “unfavorable” and 32% “unsure”); whether they knew anyone who is Muslim (58% “no”); and whether they thought the Islamic religion was more likely than others to encourage violence among its believers (35% thought it did, 42% did not, and the rest (24%) were either “unsure” or said “neither”). Like CBS, they also informed respondents about the “proposal” but in a less emotionally loaded way:

“As you may know, there is a proposal to build an Islamic cultural center and mosque in downtown New York City, a few blocks from the site of the World Trade Center. From what you’ve read and heard, do you agree more with those who object to the building of this center, or those who think the center should be allowed to be built [emphasis mine]?” Framed this way, a bare majority (51%) said they agreed with those who object to it being built; 34% thought it should be allowed to be built; and a sizable number (15%) were unsure.

CNN didn’t do much better with its misleading, one-sided proposition: “As you may know, a group of Muslims in the U.S. plan to build a mosque two blocks from the site in New York City where the World Trade Center used to stand. Do you favor or oppose this plan [emphasis mine]?” Two-thirds of the respondents bought that one.

The only context pollsters provide to the respondents for building the mosque is that it is “near” Ground Zero. There is no other context by which many people (who know nothing about the mosque) might judge whether it’s appropriate to build a mosque in that location. However, if the pollsters are so insistent on providing context, why don’t they also say that there is already a mosque near Ground Zero?

Another context the pollsters could provide is that in the Pentagon itself — in the same building which was attacked on 9/11 — there is a non-denominational prayer center, which holds a Friday Muslim prayer service.  Every day, Muslims are welcome to pray in the chapel.

If pollsters had included these extra contexts while asking about the appropriateness of building a mosque roughly two blocks north of Ground Zero, the people being polled might well have come to a different conclusion from what most polls show.

Some critics might argue that providing these extra contexts is biasing the question – and in part they’re right. But the original question, asking about building a mosque north of Ground Zero, is also biased – because the pollsters are providing information, which most people simply don’t have.

So…if we want a completely objective question, about whether people oppose the new community center, we could ask something like this:

Have you heard about the proposal to build a new Muslim community center in New York City, which would include a mosque? [This question does not provide the respondents information about where it would be located – either people already know, or they don’t.]

Among those who say they have heard of the proposal, the pollster would: Do you generally approve or disapprove of that proposal, or don’t you have an opinion?  This question, unlike the questions asked by other pollsters, encourages respondents without an opinion to admit it.  Without an explicit “don’t have an opinion” option, many people feel pressured to come up with an answer, even if they don’t have an opinion.

For people who say they disapprove, the pollster would ask: Would you be upset if the community center and mosque were built anyway, or wouldn’t you be upset?

For people who say they approve, the pollster would ask: Would you be upset if the community center and mosque were not built anyway, or wouldn’t you be upset?

These last two questions would allow a more objective assessment of how many Americans even care if such a community center and mosque were built.  My guess is that many people are not very concerned one way or another about the issue.  But we won’t know, if we don’t ask people to assess how intensely they feel about the issue.

But instead of getting an objective assessment of  1) what people know and 2) how intensely people feel about the issue, pollsters manufacture the semblance of a “public opinion” by asking biased, forced-choice questions to a sample of respondents across the country, and then treating the answers as though they represent Americans as a whole.  They don’t.

This is a travesty of what polls can do to enlighten us about the true nature of public opinion. But these biased questions provide the illusion of public opinion, which is, unfortunately, all the news media and pundits seem to want.

Ditto for the flurry of polls about whether Barack Obama is really a Muslim. As my co-columnist, David Moore, has dissected the conflicting poll numbers about how many actually believe such stuff, it depends a whole lot on how the question is posed and, I would add, on its emotional gist.

What Do Ground Zero Mosque and Muslim Media Polls Tell Us ?