Where are the Reader's Advocates? Newspapers cut trust when cutting lifeline for readers 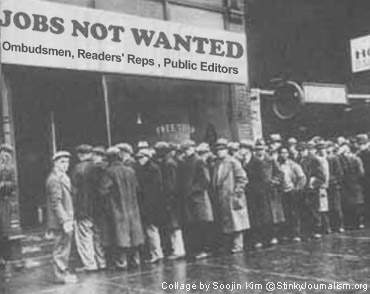 "Hey Buddy, you got a Ombudsman job?"

Drablier wrote : “Around ten newspapers have dropped their ombudsmen in the last twelve months. Since January the following papers have dropped their ombudsmen: The Sacramento Bee, the Star Tribune in Minneapolis, The Sun of Baltimore, the Fort Worth Star-Telegram, the Orlando Sentinel, The Hartford Courant, and The Palm Beach Post. According to Gina Lubrano, former ombudsman at The San Diego Union-Tribune and executive secretary of the Organization of News Ombudsmen, ‘ This is unprecedented, this dropping of ombudsmen left and right.”