'What's wrong (or not) with this cover?' ASME says 'No' to Mag Covers with Ads

‘What’s wrong (or not) with this cover?’ 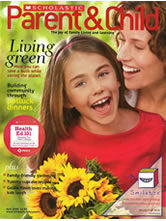 NO ADS ALLOWED! ASME decided that there was "no question" that this Scholastic Parent & Child magazine cover broke ethical guidelines that maintain magazine covers are editorial--not advertising--spaces. This April 2009 cover had two ads.

Many readers may get annoyed when they find magazine ads disguised as editorial content, but few know that the American Society of Magazine Editors (ASME) actively works on the public’s (and their own industry’s) behalf to self-regulate against advertisers’ undisclosed influence upon content and editorial spaces, such as covers.

Under the heading “Explaining Recent ASME Guidelines Decisions,” an April 2009 report on the ASME web site, provides easy-to-read summaries of recent rulings by the ASME board regarding the growing trend of magazine publishers incorporating   advertisements into their covers. (Covers and front pages were once a forbidden territory for ads. They were held a sacred boundary between “church and state” (ads and editorial). It once was an ethical assumption that ads should not be placed.on or advertisers have any influence covers.

Short and sweet, the ASME guidelines state: “COVERS, The front cover and spine are editorial space. Companies and products should appear on covers only in an editorial context and not in a way that suggests advertisement. (This includes use of cover stickers.)”

Among the six summaries ASME provides of their recent rulings is the cover of “Scholastic Parent & Child,” April 2009. I have quoted this example in full so readers can see how the summaries are organized and conceived:

“The Question: Well, there was no question. There was an ad on the cover; in fact, there were two. The first was for something called Smilebox; the ad was labeled Advertisement. The second, which was unlabeled, was for an insert sponsored by Merck (and no, the insert was not labeled as advertising either).”

“Board Decision: The board is acutely aware that the recession, coupled with changes in the way consumers and advertisers use media, is hurting magazines but believes that destroying what makes magazines valuable and unique is not the road to recovery. The board directed the staff to notify ‘Parent & Child’ that it had violated the guidelines.”

“Staff Comment: The guidelines don’t go into detail about why magazines shouldn’t put ads on their covers, probably because no one imagined even five years ago, when the current guidelines were written, that any responsible editor or publisher would think that was a good idea. ASME has published a statement on its website explaining its position.”

The statement is titled, “Ads on Covers? ASME Says No.”

It begins: “The magazine cover is a hot topic. Several magazines—’Esquire,’ ‘Scholastic Parent & Child,’ now ‘ESPN’ and ‘EW’—have recently published issues that, intentionally or not, test the tradition of the ad-free cover (funny, nobody ever talks about edit-free ad pages). One media blogger even asked, ‘What’s so special about the cover?’ To help our members answer just that question, the ASME staff has put together the following statement.—Sid Holt.”

The above statement is a must-read to be an educated media consumer.

StinkyJournalism must say it is heartened by ASME’s commitment to ethical boundaries against market forces.

‘What’s wrong (or not) with this cover?’