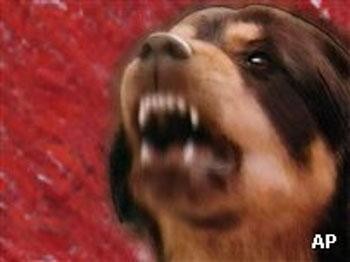 The public outcry against the pitbull terrier may be fueled as much by imprecise news reports as it is by sketchy data.

A recent story reported by Greensboro, North Carolina’s CBS affiliate, WFMY, illustrates how the issue has gained momentum through the willful fudging of basic information. The story, titled “Pit Bull Attacks Child,” is of the typical fare: a bloodthirsty dog, two unwitting children, a tragedy of unspeakable horror.

This photo was published along with the article. Notice anything strange about it? Anyone with a rudimentary knowledge of large dog breeds can see that the animal depicted in the photo is not a pit bull, but a rotweiller.

In isolation, a misappropriated photo might seem a little mistake. But examined in a larger context, these little mistakes serve a distinctive purpose: to manufacture fear.

The station cannot be faulted for having an inconsistent policy. I called WFMY web producer, Maila Rible, about the station’s decision to use the photograph. She told me it is a generic graphic used for all dog attack stories on the web site. If there are no photos of the dog involved in an attack, the station uses this “catch-all” image.

According to Rible, WFMY has several “unflattering” pictures of pit bulls in its photo bank but–like dogs hauled off to the pound–these images rarely see the light of day. I asked if WFMY would use that same photograph in the event of a cocker spaniel attack. Rible replied “yes, probably.”

But why include an image at all? Does WFMY think its readers are so bereft of imagination that they need a photo of a snarling dog to hammer home a story’s grisly details? And, assuming that WFMY believes in local journalism’s fundamental mission to educate the public, wasn’t there concern that space-filler photos like this one could cause a reader to be confused about the specifics of a story?
To be fair, Rible was receptive to my concern and said she would talk with her executive producer about developing a more precise way to illustrate their dog attack stories.

WFMY has no monopoly on inexactitude. The very definition of the pit bull breed is a jumble of imprecision. (Think you can pick a pit bull out of a lineup? Try this quiz.) The pit bull designation, in fact, comprises three distinct breeds—the Staffordshire bull terrier, the American Staffordhire terrier and the American pit bull. In media land, however, it seems to have become a matter of convenience to lump every threatening dog in this already overburdened category.

But is it fair to do so?

If a Lexis-Nexis search of newspaper headlines is any indication, the answer is a resounding “yes.” Over the last two years, there have been a total of 149 articles with the words “pit bull” and “attack” in the headlines or opening paragraphs. Conversely, over the same period, there were zero articles including the words “German shepherd,” “rotweiller,” “doberman” or “chow chow” and “attack” in the headline.

So why aren’t dog experts acquiescing to the media’s intense focus on pit bulls? Because the data paints a much different picture.

According to several recent studies, including one conducted in El Dorado County, California, unneutered male dogs and unspayed females of any breed are far more likely to bite than neutered members of any specific breed.

There are other factors as well. Dogs with a history of being chained are nearly three times as likely to bite, according to a Denver study. In the El Dorado County study, 82% of biting dogs were unlicensed, and 56% were not vaccinated for rabies, providing strong evidence that owner apathy plays a critical role in biting behavior.

Karen Delise, author of the book Fatal Dog Attacks, points out there are approximately 20-30 deaths caused by dog attacks each year (about the same number caused by fireworks or contact with hot tap water). And these deaths are spread out among large dog breeds randomly. Therefore, labeling any breed as the “people killer” par excellence is a statistical fallacy.

“Since only an infinitesimal number of any breed is implicated in a human fatality, it is not only unreasonable to characterize this as a specific breed behavior by which judge an entire population of dogs, it also does little to prevent fatal or severe dog attacks as the real causes and events that contribute to a fatal attack are masked by the issue of breed and not seriously addressed,” Delise writes.

“In the 1950s, for instance, it was routine in dog attack stories to talk about reasons why a dog attacked. Breed was a secondary fact,” Delise said. “Today, breed is the main focus and the stories rarely mention events leading up to a dog attack or information about the background of the owner.”

She points to a more recent phenomenon—what she refers to as “almost attack” stories. Delise says these stories, in which pitbulls are invariably the antagonist, turn attacks that didn’t happen into news and contribute to growing negative sentiment against the breed.

New Yorker writer Malcolm Gladwell, in his article, The Troublemakers, published in February, talks about the similarities in the way law enforcement conducts racial profiling and the way the media has singled out one breed of dog to be the poster child for violent dogs everywhere.

He gets to the nub of it quickly. “The junk-yard German shepherd—which looks as if it would rip your throat out—and the German-shepherd guide dog are the same breed,” writes Gladwell. “But they are not the same dog, because they have owners with different intentions.”

For the children harmed in last November’s attack, Gladwell’s revelation is little consolation. But those seeking deeper meanings and useful generalities should take a closer look at the animals holding the leashes.