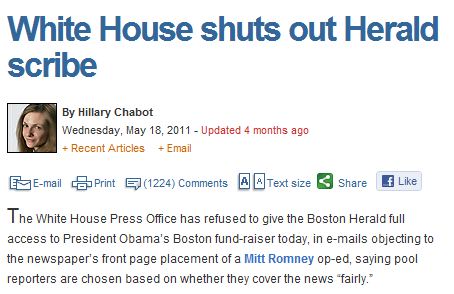 The Herald transformed Obama's "Yes We Can" slogan to "Yes We Ban" after the Herald wasn't chosen for a local press pool. (Credit: the Boston Herald)

The White House denied the Boston Herald access to a Barack Obama fundraiser and accused the newspaper of bias, the Herald reported.  But, The Herald hasn’t been permanently banned from being included in the press pool.  And the Herald wasn’t blocked from total access to the president’s visit – just partial.

As the Herald explained, Obama’s May 18 visit to Boston was for a re-election fundraiser and while all media could attend his “afternoon speech,” just a “selected pool” of media were permitted to access the rest of the fundraiser.  The Herald stated that it has asked to be in the pool for Obama’s previous two trips to Boston but hasn’t been chosen.

Matt Lehrich, a spokesperson for the White House, reportedly e-mailed the Herald claiming the Herald exhibited bias by publishing a Mitt Romney oped on its front page in March:

“I tend to consider the degree to which papers have demonstrated to covering the White House regularly and fairly in determining local pool reporters.”

“My point about the op-ed was not that you ran it but that it was the full front page, which excluded any coverage of the visit of a sitting US President to Boston. I think that raises a fair question about whether the paper is unbiased in its coverage of the President’s visits.”

Meanwhile, the Knight Center for Journalism reported that the White House Correspondents Association chose “the pool participants” and not the Obama administration.  Therefore, any “bias” Lehrich may have commented on was irrelevant to the Herald’s not being chosen.

Boston Globe blogger Mark Leccese suggested that the Herald’s being excluded was OK for the newspaper:

“The Boston Herald, of course, tries very hard to be Boston’s print version of FoxNews, and if that is what you want to be, nothing could be better than a snooty brush-off from a White House press aide.”

Fox News reported that  Earnest explained the Globe “had arranged with the White House Correspondents Association, independent of the White House press office, to be part of the traveling press pool. As such, there was no need for an additional local pooler.” Earnest noted that the Herald, like other media, will be “considered” for any future visits.