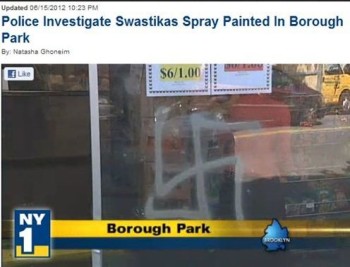 In the dark of night on June 14, 2012, vandals spray painted symbols of hate in a largely Jewish neighborhood of Brooklyn. Given the history of the swastika and the suffering of the Jewish people at the hands of the Nazis, emotions in the Jewish community were naturally running high.

However, NY1 reporter Natasha Ghoneim decided to fan the flames of an already volatile situation by quoting hateful speech in her report “Police Investigate Swastikas Spray Painted In Borough Park.”

Looking at the multitude of articles written on the vandalism and the dozens of community members who availed themselves to the press to make statements, what does a death threat really add to the story?

Other sources discuss grandmothers weeping at the site of the horrible graffiti and the fear and horror these acts have spawned.  Besides creating a sensation, Ben-Simcha’s call for vigilante justice in the NY1 report only adds, in iMediaEthics view,  the potential –however remote–of inciting revenge and violence.

Reporters and their news outlets should act responsibly and not publish hate speech of any kind without solid editorial justification, especially when there is a real risk of creating more tension or even violence in a community.

We have reached out to Ms. Ghoneim and NY1’s media representative for comment and are still waiting for a response. iMediaEthics also called and emailed Councilman David Greenfield for comment about the sensational statement. The NY 1 story also reported that the councilman offered a $1,000 reward to capture the culprits.