Why is Dina Merrill's 'Murder' on The NY Post Front Page? She's NOT Dead

Why is Dina Merrill’s ‘Murder’ on The NY Post Front Page? She’s NOT Dead 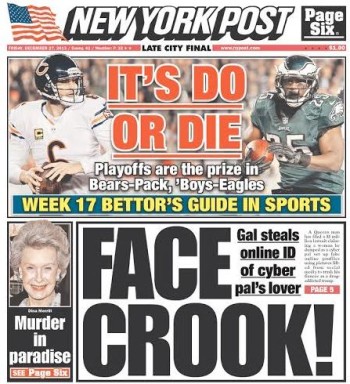 Twitter hoaxes abound, making false claims that certain celebrities are dead. Today’s New York Post front page is out of the same harmful playbook when it misleads readers into believing, with a headline and photo of the actress Dina Merrill, that she, not the actual “relative” of Merrill, was murdered.

iMediaEthics says “harmful” because of the senseless shock meted out to Merrill’s friends or acquaintances, including this reporter, when seeing Merrill’s photo on the Post‘s cover alongside the frightful word “Murder.” iMediaEthics will be emailing friends of Merrill and the New York Post and will update any response.

The front page says, “See Page Six” below a head shot of Merrill.  Page Six is the Post‘s gossip page by Emily Smith, which seemed a strange place for a report about the murder of the much beloved and elegant retired actress, who appeared with star Elizabeth Taylor in the movie Butterfield 8.

The punchline in this non-joke is received when reaching Page Six (which is actually on page 18). The cruel bait-and-switch becomes clear with the headline “Star’s kin slain on Carib Isle.”

The headline of the online version of the story, told the truth, “Relative of actress Dina Merrill slain in the Caribbean.”  Merrill had not died.

It was “Nedenia Dye, a multimillionaire relative of actress Dina Merrill and a descendant of Marjorie Merriweather Post” the lede tells us. Dye was “stabbed to death in the Caribbean by her drug-addicted ­musician partner, according to police,” the Post reported.

The Post reports that her family “hasn’t yet told Merrill” about the loss of Dye.  Hopefully, no family members saw today’s New York Post cover first, to be misled into first believing it was Merrill who was murdered.

The New York Post reported Merrill is “nearly” 90 years old but her IMDb bio states that she was born Dec. 9, 1925, not 1923 as cited in Wikipedia and other places, making her 88. iMediaEthics is checking and will post any update.

Why is Dina Merrill’s ‘Murder’ on The NY Post Front Page? She’s NOT Dead