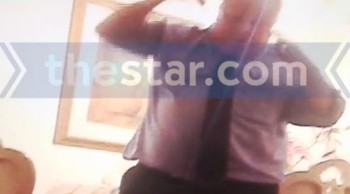 A screenshot from a video of a drunk Rob Ford talking about killing someone. (Credit: Toronto Star, screenshot)

The Toronto Star paid $5,000 for a video of Toronto Mayor Rob Ford drunkenly screaming that he was going to kill someone, as iMediaEthics has previously written.

iMediaEthics asked Toronto Star reporter Kevin Donovan, whose byline is on the Star report in question, why the newspaper decided to pay for the video of Ford making murderous threats while refusing to pay for a video that it was offered this summer that showed Ford smoking crack.  Back in May, the Star said it decided against paying for the crack video, which it had been told would cost “six figures.” (The Toronto Police confirmed Oct. 31 that they have obtained the crack video.)

The Star’s Donovan told iMediaEthics by email the drunk murder rant video was approved because the money was going to a good cause – “legal purposes.” Donovan wrote:

“I satisfied myself that this money was not going to someone involved in the guns and drugs trade (the people with the original video were involved, or at least the main one was involved, in that trade allegedly). In this case the money was going to a family to use for legal purposes. The media does pay for images all the time and we felt this payment was consistent with that.”

Meanwhile, in contrast, daily newspaper the Toronto Sun reported that it was also offered the video by an “anonymous person,” but it “did not purchase it or enter into negotiations.”

Despite not buying the video, the Sun said that source gave it “two short clips from the video.”

Still No Comments on Globe and Mail‘s Ford Stories

Back in June, when the news was focused on the controversy surrounding the allegations that there was a video of Ford smoking crack, comments were blocked on both the Toronto Star and Globe and Mail’s websites.

Globe and Mail public editor Sylvia Stead addressed the issue in a recent post.  Stead quoted the globeandmail.com executive editor, Jim Sheppard, as explaining that comments are blocked because of the possibility of contempt of court charges or issues in any future criminal cases.

By blocking comments, the newspaper doesn’t have to worry about publishing information that could taint any potential trial. “Canada’s contempt of court laws restrict the kind of information that can be published in advance of a trial in order to protect the right of the accused to a fair trial and an unbiased jury,” he explained.

Earlier this year, public editors for the Toronto Star and Globe and Mail provided their reasons why no comments were allowed on Ford stories, as iMediaEthics wrote at the time. The Globe and Mail said then that comments were blocked for legal reasons and the Toronto Star said the decision was ultimately made for several reasons including the likelihood that the comments section would get out of control with attacks.