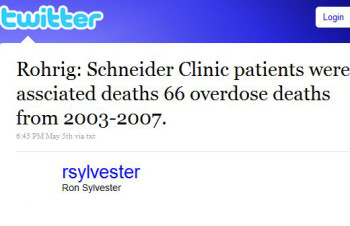 Wichita Eagle reporter Ron Sylvester has live tweeted from the court room extensively on the cases related to "pill mill" doctor Stephen Schneider and his clinic--see screen save above. What he doesn't disclose is that his wife's law firm defends Schneider Clinic in numerous civil cases. (Credit : Twitter)

[TO READ THE LATEST REPORT IN THIS SERIES, ALSO GO TO: Part 2  and Part 3]

EXCLUSIVE, Special Report, Part 1: Wichita Eagle reporter Ron Sylvester’s claim to fame might be his four years as a director for the Society of Professional Journalists or his run for its presidency in 2008. Or even, most recently, it may be his innovation of live tweeting from court. He has extensively covered the cases involving Stephen and Linda Schneider, whose clinic The Associated Press reported May 12, 2010, has been “linked to 68 alleged overdose deaths.”

But, what his readers and 2,100 Twitter followers might not know is that Sylvester hasn’t disclosed in his 60-plus articles and countless tweets on the case that his wife, Gaye Tibbets’ law firm has defended Stephen Schneider to the tune of at least $280,000 in six settlements.

Mr. Sylvester’s Wichita Eagle blog promises in the about section that he “recuses” himself from cases on which his lawyer wife works. The perception, if not the reality, is that as a partner, Gaye Tibbets and her husband Ron Sylvester financially benefit from ANY cases her firm, Hite, Fanning, & Honeyman, LLP, represents.

So, why wasn’t his wife’s role and their financial relationship to the cases on which he was reporting disclosed to his readers?

imediaethics has written and called dozens of times, even up until publication time. Sylvester and his editors refuse to speak to us.

imediaethics got a tip about Wichita Eagle reporter Ron Sylvester’s conflict of interest. (The Wichita Eagle is a daily newspaper with a circulation of 82,912, according to Mondo Times.)

Wichita’s ABC affiliate KAKE reported that Schneider and his wife, Linda, were federally indicted in December of 2007 for money laundering, fraud, and illegally prescribing narcotics in their medical clinic.

imediaethics filed two Freedom of Information requests to the Health Care Stabilization Fund in Topeka, Kansas. The May 14 FOIA is available here. The May 20 FOIA shows Hite, Fanning & Honeyman has been paid $283,761 in lawyer fees.  A second Freedom of Information request to the Health Care Stabilization Fund revealed that Hite Fanning has received more money than Woodard, Hernandez, Roth & Day, the other law firm which has defended the Schneiders in their civil cases.

As Sylvester himself reported in April 2008, the stabilization fund “augments private medical malpractice insurance and usually represents only a fraction of the total settlements.”

And those are just what initial searches have found.

Judge William Woolley, on the bench for the 18th Judicial District, told imediaethics by e-mail that “Dr. Schneider is represented by Steve Day and Chris Cole.  The Schneider Medical Clinic is represented by Randy Troutt and Don Gribble…Those attorneys in two law firms respectively are the lead counsel for their clients.  Occasionally, other attorneys from those two same firms appear.”

There are many cases against the Schneiders – both civil and criminal – and Hite, Fanning, & Honeyman attorneys are not the only lawyers defending Schneider.

In StinkyJournalism’s view, the high profile nature of the Stephen Schneider cases and the significant financial amounts that Sylvester’s wife’s law firm, Hite, Fanning & Honeyman, has received, present a clear conflict of interest for Sylvester and at least warrant significant disclosure on each article, if not his recusal from reporting on the cases entirely.

Buried in the about section of The Wichita Eagle’s court blog “What the Judge Ate for Breakfast,” for which Sylvester writes, only this disclosure is present:

“Ron is married to an attorney, Gaye Tibbets, and ‘recuses’ himself from reporting, when her cases make the news.”

None of these articles include ANY disclosures.

Outside of his reporting for The Wichita Eagle and its court blog, Sylvester also live tweets some cases.   Some of Sylvester’s articles include a feed of his Twitter account – like here.

Notably, Sylvester hasn’t reported on the Schneider case since May 11.

StinkyJournalism first reached out to him and his newspaper May 13.

A search of The Wichita Eagle’s Web site shows that the only three articles about the case from May 12 to May 21 and they were generated by the Associated Press:  May 12, May 20, and May 21 .

Sylvester last tweeted about the Schneider case May 12, even reporting that “the trial resumes at 9 a.m. CDT tomorrow.”  But instead of dealing with answering StinkyJournailsm’s inquiries about the conflict of interest, apparently The Wichita Eagle editors have decided, without explanation, to suddenly break off from covering it?

SYLVESTER, AS JOURNALIST, MADE HIMSELF THE STORY

Sylvester was the Society of Professional Journalists Region VII director from Sept. 2004 to Sept. 2008. and in October 2007, was named the top regional director for the SPJ.  Sylvester ran for SPJ president in 2008.  The SPJ is “the nation’s most broad-based journalism organization” and has about 9,000 members.

Sylvester promotes himself and his reporting and served in journalism leadership, which in StinkyJournalism’s view, puts him in the cross hairs for expectations of his maintaining high ethical standards.

He has been featured in articles for his court reporting and live tweeting (as recently as yesterday). He tweets publicly and frequently with updates about his work to his 2,100 followers.  In November 2009, Nieman Journalism Lab wrote an article about Sylvester’s court access and reporting.

Repeated attempts by StinkyJournalism to contact the newspaper were ignored by the Wichita Eagle.

Sylvester has not responded to StinkyJournalism’s e-mail requests and phone calls, however, yet he has posted consistently on his Twitter, which he uses for both news updates and personal posts.

He even posted May 21 to let his followers know he is featured in an article by Legal Media Matters for his court reporting.

And, in that article, readers learn that “On Monday I’ll post an interview with Sylvester, a veteran legal affairs and courts reporter who also covered the BTK serial killer. He’ll discuss his project and reveal how he was able to persuade judges, lawyers and court personnel to give him access.”  The May 24 article, characterizes Sylvester as “no rookie” and quotes him as stating:  “the judges trust me because I’ve worked the beat so long.”

Further, Sylvester wrote on his own blog March 31 about how much he loves his Twitter followers and how Twitter allows his readers get to know him better.

For all his talk about social media and being in contact with his readers, where is Sylvester’s response to StinkyJournalism about this serious matter? No tweets, just the sound of crickets.

The Wichita Eagle is a McClatchy-owned newspaper.  StinkyJournalism contacted McClatchy, who directed us to Chisenhall and advised us to copy them on e-mails to the editor.

As Sylvester is a Society of Professional Journalists member and served in high-profile leadership roles in the SPJ membership, we also informed the SPJ ethics committee on May 15. We are waiting for its response.

Still no response from Sylvester or Chisenhall, but, Sylvester is back in the Schneider courtroom, tweeting away about the case.