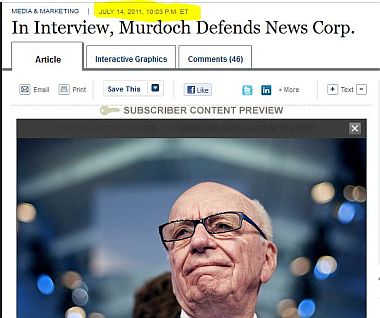 The Wall Street Journal has been criticized for its interview with Rupert Murdoch, the Guardian reported.

According to the Guardian, that July 14 article was faulted by a Wall Street Journal “special editorial committee” for not featuring “tougher questioning.”

The five-person committee was created when Rupert Murdoch’s News Corp bought  the Wall Street Journal and Dow Jones, according to the committee’s report.  The report (see here) states that “the broad and  consistent answer” from Dow Jones employees — current and past — is that there is no “political, ideological or commercial pressure on…news judgment” at the company.

The committee’s report states that “the Journal was slower than it should have been at the outset to pursue the phone-hacking scandal story, in our opinion, though it is doing much better now with aggressive coverage, fitting placement in the paper, and unflinching headlines.”  That is, with the exception of the interview.

Former Daily Mirror reporter James Hipwell alleges that the UK Mirror engaged in phone hacking, the Guardian reported. As iMediaEthics has previously written, the Mirror and former editor and current CNN host Piers Morgan have denied allegations that the phone hacking scandal extended to the Mirror.

Hipwell “worked as a financial journalist under the editorship of Piers Morgan,” according to the Guardian.  He claimed that other Trinity Mirror-owned newspapers like the People also hacked phones.

The Independent added that Hipwell called phone hacking “endemic” at the Daily Mirror and suggested Piers Morgan knew of phone hacking at the newspaper.  “Piers was extremely hands-on as an editor.” according to Hipwell.  “I can’t say 100 per cent that he knew about it. But it was inconceivable he didn’t.”

“After they’d hacked into someone’s mobile, they’d delete the message so another paper couldn’t get the story. There was great hilarity about it,” Hipwell claimed, according to the Guardian.

However, a spokesperson for Mirror parent company, Trinity Mirror, has “denied its journalists had broken the law” and claims the Hipwell’s allegations are “totally unsubstantiated.”  The spokesperson stated:

“Trinity Mirror’s position is clear. Our journalists work within the criminal law and the PCC (Press Complaints Commission) code of conduct.”

Likewise Morgan denied the allegations, according to the New York Times. “I have never hacked a phone, told anyone to hack a phone, nor to my knowledge published any story obtained from the hacking of a phone,” Morgan is quoted as saying. “I am not aware, and have never seen evidence to suggest otherwise, that any Mirror story published during my tenure was obtained from phone hacking.”

Morgan reportedly labeled Hipwell “not a credible witness.” The New York Times added that a CNN spokesperson ” Mr. Morgan had been asked about the accusations and “denied involvement in phone hacking both publicly and privately.””

The Guardian noted in 2006, Hipwell spent time in jail for stock price manipulation.

Did Rupert Murdoch Know about the ‘For Neville’ E-mail?

The Guardian’s Roy Greenslade noted that Max Mosley, who in 2008 successfully sued the News of the World for invasion of privacy, claims that Rupert Murdoch’s July 19 testimony that he “never heard of” former News of the World reporter Neville Thurlbeck is inaccurate.

Thurlbeck was behind the News of the World story on Mosley that led to the lawsuit.  According to Greenslade, Mosley wrote to Murdoch in March 2011 naming Thurlback “several” times.  However, “it is not known whether Mosley’s letter or email was read by Murdoch.” 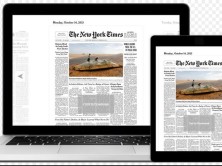