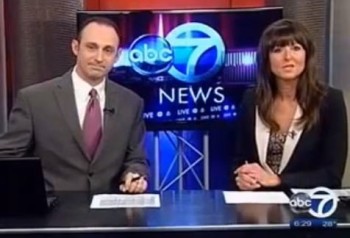 Television journalists are paid to broadcast the news. Seldom do they actually make the news. But that’s exactly what happened last month, on Bangor, Maine’s ABC-affiliate WVII, when two broadcast journalists –Cindy Michaels and Tony Consiglio — resigned their jobs on the air, citing the station’s lack of journalism ethics.

During the Nov. 20, 6 p.m. newscast, the two said they “are very sorry for having to say goodbye for now” and attributed their resignations to “some recent developments, ” the Associated Press reported.  Consiglio added to the Bangor Daily News that:

“I just wanted to know that I was doing the best job I could and was being honest and ethical as a journalist, and I thought there were times when I wasn’t able to do that.”

While WVII’s vice president and general manager Mike Palmer told the Bangor Daily News Consiglio was about to be fired and called the resignations “not unexpected,” Michaels, for her part, told the AP she didn’t know of such plans and listed a few reasons to the New York Times for the decision to quit, including:

However, the New York Times reported that Palmer disputed these claims and pointed to a lack of “examples of bias.” And, Palmer added “upper management is not involved in the daily production of the news,” according to the Bangor Daily News.

iMediaEthics has sent messages through Facebook to Michaels and Consiglio asking for more specific information about the reasons behind quitting, what attempts they made to discuss these issues with the station, when they made the decision to quit and more. We’ll update with any responses.

The Associated Press noted that six years ago, “the New York Times reported that Palmer prohibited further stories on global warming after [WVII and WFVX] reported from a movie theater where Al Gore’s movie An Inconvenient Truth was opening.”