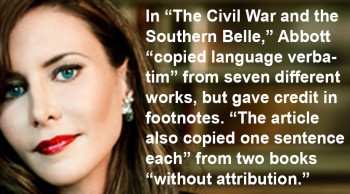 iMediaEthics just came across a May editors’ note about plagiarism in two opinion articles on the Civil War published by the New York Times that doesn’t seem to have received any coverage.

The May 14 editors’ note, published on the Times‘ website and at the bottom of the two articles, revealed that Karen Abbott, the author of the two articles in question, broke Times policy for attribution. While in some cases credit was given in the end notes, at least two sentences were lifted from sources without any credit being given. Abbott’s website identifies her as a bestselling author and historian. Her books are  “Liar, Temptress, Soldier, Spy,” “American Rose,” and “Sin in the Second City.”

Abbott’s two articles “copied specific language and passages from several books and papers,” the Times editors’ note reads. “In most of these instances, the writer cited the sources in the article’s endnotes. However, copying language from other sources without proper attribution is a violation of Times policy.”

“Had The Times known about the copied language in both essays, it would not have published them,” the editors’ note reads.

A reader complained about the attribution issues, according to the Times, which said Abbott defended her lack of crediting in text as acceptable in her field. “Contacted by The Times, Ms. Abbott said that it is common for historians to draw on primary and secondary sources as long as those sources are acknowledged,” the Times noted.

But that wasn’t acceptable in the Times‘ standards, which pointed to the American Historical Association’s guidelines that clearly state that it is plagiarism if authors “fail to use quotation marks around borrowed material and to cite the source, use an inadequate paraphrase that makes only superficial changes to a text, or neglect to cite the source of a paraphrase.”

In the Aug. 18, 2014 article “The Civil War and the Southern Belle,” Abbott “copied language verbatim” from seven different works, but gave credit in footnotes. “The article also copied one sentence each” from two books “without attribution.” In her Dec. 22, 2014 article, “A Newspaper for Injured Civil War Vets,” Abbott “copied sentences verbatim” from two others but credited them in the footnotes.

iMediaEthics asked the Times to ask for comment about the editors’ note, if it also reviewed the other articles Abbott wrote for the Times, if Abbott’s articles were solicited by the Times or excerpts from one of her books, and if the editors’ note ran in print. Times spokesperson Danielle Rhoades-Ha told iMediaEthics by e-mail: “Our editor’s note represents our comment on the matter.”

iMediaEthics has written to Abbott to ask if this incident will change how she includes attribution in the future, if she has any comment about the Times editors’ note and if she will continue to write for the Times.