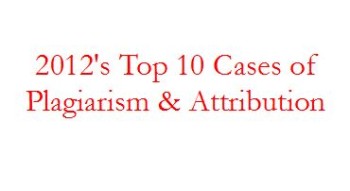 Fox News rewrote without credit an Atlantic Wire article on dolphins earlier this year. After the Atlantic Wire’s John Hudson publicized the stolen story, Fox News added an editor’s note apologizing and explaining it has replaced the story with a “properly edited and sourced version…with a link to the original theatlanticwire.com story.”

Hudson told iMediaEthics at the time that even though the Atlantic Wire contacted Fox News about the issue, they “never ended up receiving a direct response.”
9) Sydney Morning Herald’s Tanveer Ahmed

In September, Australian media watchdog TV program Media Watch exposed Sydney Morning Herald columnist Tanveer Ahmed as a plagiarist.  Ahmed, who is also a psychiatrist, apologized for his “regrettable mistakes” in an email to iMediaEthics, saying they were “sloppy and lazy.”

A month later, Ahmed apologized publicly in a column for The Australian where he compared being outed for plagiarism to being “an addict forced to look in the mirror and survey the wreckage.”  This month, Ahmed told iMediaEthics his “plagiarism had much more to do with complacency than fraud” and that he intends to become a writer again.

As of Dec. 21, it appears all of Ahmed’s columns have been unpublished from the Herald as a search of its website produces no stories.

The Fairfield Minuteman started 2012 off with an apology for a Jan. 5 front page plagiarized story. The weekly Connecticut newspaper’s story lifted many paragraphs from the Connecticut Post and Fairfield Citizen.

The Minuteman’s Group Editor Matt DeRienzo explained in a blog post about the plagiarism that the reporter, sports editor Eric Montgomery, “is no longer an employee.”

The Phoenix New Times linked that revelation of plagiarism to the student newspaper at ASU, The State Press, and an ongoing plagiarism scandal there during which the State Press apologized for student Raquel Velasco’s plagiarism and announced she had been fired.

While ASU wouldn’t confirm if Velasco was the same student who plagiarized at the Tribune the school did point iMediaEthics to the university’s Academic Integrity Policy saying that if students “have engaged in academic dishonesty in any form – including” plagiarism, “that student…will be dismissed.”

Arizona’s KPHO, a station where Velasco interned, told iMediaEthics that it reviewed her work after the university contacted the station about Velasco’s plagiarism at the State Press. The review found no plagiarism issues, but the station did dispute Velasco’s resume description of her work at the station.

CNN and Time magazine both suspended well-known journalist Fareed Zakaria after he apologized for his “terrible mistake” in his August Time column having “close similarities to paragraphs in Jill Lepore’s essay in the April 22nd issue of the New Yorker.”

Shortly after those suspensions, the Washington Post annonced it was going to “review” Zakaria’s work and Clyde Prestowitz accused Zakaria of taking a quote from his 2005 book for Zakaria’s 2008 book The Post-American World.

Would it be a fall from grace?

After airing his claims in a Washington Post article, Prestowitz quickly apologized for his “error” in wrongly accusing Zakaria of not giving him credit when he had since learned Zakaria had.  The Washington Post then issued a correction and apology for its report on Prestowitz’s claims.

Zakaria ended up being re-instated at CNN and Time — within a week of his suspensions being announced — and he also repeated his apology on air.

In August, the Boston Globe snuck an editor’s note onto an editorial disclosing attribution issues, but iMediaEthics’ review of the editorial and local NPR affiliate WBUR’s earlier report found a combination of verbatim content and re-written content.

The Globe and WBUR declined to give iMediaEthics any comments on the incident.

Steve Jeffrey resigned as publisher of Canadian newspaper the Anchor Weekly following accusations that  “more than 40 of his weekly columns” plagiarized, as iMediaEthics wrote in April.

Jeffrey apologized for plagiarizing “many of the words” in columns, but the paper was “suspended from the [Alberta Weekly Newspapers Association] for a period of one year.”

As Sumbal explained, in two cases, Dateline, a daily newspaper, took photographs from other news outlets, cropped them and changed the credit line to steal credit for the images.

The reporter, Michael J. Tobin, apologized but excused his “error” with his lack of journalism education, being sick and having too much work to do, as we wrote at the time.  iMediaEthics marked up a Feb. 17 article by Tobin to see how much content was lifted from newspapers the Forecaster and Current. The majority of the article was verbatim copy-and-paste. Check it out.

In a few short months, Jonah Lehrer lost his job at The New Yorker and was exposed as a self-plagiarist and fabricator. We’re putting him on our top plagiarist list since being busted for self-plagiarism led to his downfall.

Wired had NYU journalism professor Charles Seife review some of Lehrer’s work at the magazine. Seife reported he found

Wired didn’t publish Seife’s review; Slate did. But Wired‘s editor-in-chief did tell readers that Lehrer’s questionable posts were all blog posts and not in the magazine.