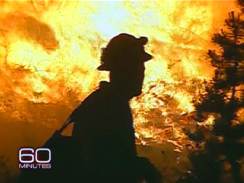 The CBS 60 Minutes caption for video of their segment "The Age of Megafires" (see video screen shot above) states: "Global warming is increasing the intensity and number of forest fires across the American West. Scott Pelley goes to the fire line to report."

60 Minutes recently rebroadcast a 2007 story titled “The Age of Megafires,” which discusses the link between forest management policies, climate changes in the western United States, and a recent increase in the frequency of large western forest fires.

Dealing with the subtle, and often thorny issue of climate change, the broadcast unfortunately makes a few factual missteps in its coverage. This kind of accuracy problem can often serve as a toehold for critics to pick apart news stories that tackle possible effects of climate change.

Writers and scientists including Andrew Revkin of the New York Times blog dotearth, and Matthew Nisbet, a professor of social science at American University in Washington D.C. have argued that if climate reporting doesn’t strive even harder for accuracy than regular journalism, it can become fuel for the fire of anti-climate change rhetoric that misinforms Americans and muffles vital public information.

To explore whether the factual problems in this 60 Minutes report bode ill for it as a responsible and educational piece of journalism, StinkyJournalism talked with the University of Arizona, Tucson Professor and scientist Tom Swetnam, who was featured in the broadcast, to get his take on the report’s accuracy.  Interestingly, though he admits that he was misquoted in the story, Swetnam actually thinks the piece was, on the whole, well done.

Fire And Climate: A Nuanced Relationship

One red flag in the 60 Minutes report is a subtitle included in the online text, but not in the video of the broadcast itself. It states that global warming “is increasing the intensity and number of forest fires.” The phrase “is increasing” seems here to imply causation – that global warming (assumed here to mean climate change caused by human-produced greenhouse gasses) is the cause of increased wildfire. This is not necessarily the case.

A more nuanced relationship between climate and fire is actually at work here, according to Swetnam. Warmer weather in recent decades in the western United States is strongly associated with an increase in the frequency of large forest fires, he says. And that association, coupled with our understanding of the mechanics of fire (hotter, drier conditions are likely to cause fire) implies that these climate changes are a significant cause of increased fires.

“I am a tree ring scientist so I use reasonable inferences about mechanisms to explain what is going on. I’m using correlative statistics– I mean, that’s what we do,” Swetnam says. “There’s an assumption that correlation doesn’t prove everything. But actually when you have multiple lines of evidence, and you have evaluated alternative hypotheses, and you are using thousands of observations repeated over time, correlation can approach as strong a line of evidence for causation as anything.”

As far as human-caused global warming is concerned, Swetnam explains that warmer weather could in turn be linked to anthropogenic climate change. But such a link has not been proved definitively.

“The line of reasoning we had in the paper was specifically that we’re seeing these patterns across the USA–rising numbers of large fires, and they’re particularly concentrated in the years and the seasons when its especially warm, and when there is an earlier arrival of spring,” Swetnam says. “What I stated to 60 Minutes was that the extent of drought and recent trends are widely related to global warming and so the fires are related to global warming.”

A little later in the broadcast, 60 Minutes bungles this, saying that “Swetnam says that climate change – global warming – has increased temperatures in the West about one degree and that has caused four times more fires.”

Swetnam contends that this paraphrase is not an accurate representation of what he said, which was “probably more of a probabilistic statement” – that recent climate changes in the west are causing more fire, and that there is some evidence that those changes are linked to human-caused global warming.

“Probably–not definitively but probably–the warming and drought conditions in the western United States are in fact connected with the anthropogenic greenhouse gases,” he says.

Swetnam also argues that in the years since the original broadcast, his research has made him more convinced that anthropogenic climate change is linked to these local climate issues and the worsening fires.

Another accuracy problem comes when 60 Minutes reporter Scott Pelley says of these larger fires that “In truth, we have never seen anything like them before…” This is not true. Large fires have been recorded more than 100 years ago.  What is true–according to Swetnam’s research–is that we are seeing these huge fires much more frequently now.

Meanwhile, a big mistake Swetnam worried the piece would make–to associate his research on the large forest fires featured in the broadcast with the recent fires in California–didn’t happen. “Actually, they were quite restrained,” he says—not trying too hard to connect the increasing fires in mountainous western forests with the chaparral fires of southern California. An introduction to the online video does call a recent California fire a “Megafire,” but the report itself does not directly connect the California fire to those that are the subject of Swetnam’s research.

The final moments of the piece seem to weigh strongly on the charge that human-caused global warming is at work in these fires. Pelley talks with Bureau of Land Management Fire Chief Tom Boatner and the broadcast ends on their conversation:

“You know, there are a lot of people who don’t believe in climate change,” Pelley remarks.

“You won’t find them on the fire line in the American West anymore,” Tom Boatner says. “‘Cause we’ve had climate change beat into us over the last ten or fifteen years. We know what we’re seeing, and we’re dealing with a period of climate, in terms of temperature and humidity and drought, that’s different than anything people have seen in our lifetimes.”

StinkyJournalism spoke with retired Chair of the National Fire and Aviation Executive Board, Chief Tim Murphy, who ran large fire operations for many years and now trains others. Murphy cautions that even though he thinks global warming is a factor, it’s only one part of a complex issue. “I think it’s part of it, but I mean, definitely there’s a change in our climate in the last 30 to 40 years, but as far as the Megafire scenario, that’s just a small piece of it,” he says.

Swetnam agrees.  But he thinks the 60 Minutes piece did a good job of balancing climate with the other main factor in the western forest fires—build up of fuels from protective forest management. “They did due diligence and due coverage of some of these other causal factors,” he says. A key exchange of the Megafires video explains:

The policy was to put out all fires immediately. “Because we so successfully fought fire and eliminated fire from this ecosystem for a hundred years, because we thought that was the right thing to do, we’ve allowed a huge buildup of fuel in these woods. So now, when the fires get going, there’s a lot more to burn than historically you would’ve seen in a forest like this,” Boatner explains.

“Was 60 Minutes too breathless, too definitive?” Swetnam asks. “That’s possible.”

Hyperbole has often been picked up by critics as an example to discredit climate reporting. But Swetnam thinks that even without the accuracy issues, the story would still have been attacked by climate change skeptics.

“Should all news reporting be absolutely perfect and show no chinks? I just don’t think that’s a realistic expectation,” says Swetnam. “My personal sense of it is that they did not go too far.  Sure, people will find places to criticize–both deniers and knowledgeable firefighters and officials, but that doesn’t mean it’s a bad story.”

“I’m very concerned about climate change.  And I think that much of what we’re seeing the west in terms of wildfire problems are related to that,” Swetnam says. “So I am in favor of educational informative pieces that express those concerns and allow people like Tom Boatner to express his personal view of that.  Even if it’s framed in a way that could be critiqued by people who are contrarian.”

We plan to go over these complex issues with other experts to get a range of interpretations.  Look for continuing discussion of the Megafires story in future StinkyJournalism reports. We will post any response from 60 Minutes when received.