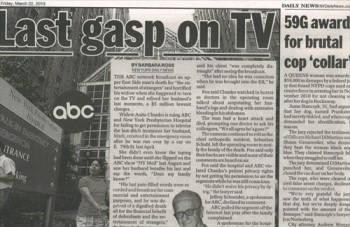 A scan of the NYDaily News story on the Chanko family lawsuit.

Imagine: Your husband was hit by a truck and died. A year later, as you’re watching an ABC News program, you hear him utter his last words in an operating room. Scrub-clad personnel scurry about the room. “We all agree he’s gone?” you hear a physician ask. You had no idea that your family trauma was filmed.

This is precisely what Anita Chanko experienced when she tuned into the ABC News documentary series NY Med last year, according to Mark Fox, the Chanko family attorney who filed a lawsuit in their behalf on March 18.

It turns out that ABC News had broadcast the 2011 death of her husband, Mark Chanko, in an operating room at the Weill Cornell Medical Center as part of the network’s medical documentary series NY Med. Fox explained to iMediaEthics that it was only after viewing the program that the Chanko family learned that Mr. Chanko’s last moments had been filmed.

Last week, iMediaEthics contacted the attorney Fox to get an update on the lawsuit that the Chanko family filed with the New York Supreme Court, first reported by the New York Daily News on March 21 and the Daily Mail on March 22. Fox told iMediaEthics that ABC and the other defending parties’ deadline to respond is June 28. He expects ABC to respond with a motion for summary judgment.

The defendants named in the $5 million suit are ABC, Inc.; the New York-Presbyterian Hospital along with employee Sebastian Schubl, M.D.; and two surgeons not associated with the hospital who acted as attendants while Chanko was in the operating room, according to Mr. Fox.

Cameras, microphones, and studio lights had been set up in the operating room, and although Chanko’s face was obscured, his family immediately recognized his voice, according to the Daily Mail.

When the Chanko family was awaiting an update on his condition in the hospital waiting room, they say one of the defendants, Dr. Schubl, and a social worker employed by the hospital informed them of Chanko’s death. The Chanko family, however, didn’t know Dr. Schubl was wearing a microphone during this sensitive conversation about Chanko’s medical condition, according to Fox.

Dr. Schubl’s delivery of the news to the family was broadcasted as part of the segment, according to the complaint. The Daily News noted that according to Fox, the faimly’s reaction isn’t “heard on air.”

The lawsuit claims that Chanko’s “last pain filled words and requests were recorded and broadcast for commercial and entertainment purposes.”

Julie Townsend, a spokesperson for ABC News, answered iMediaEthics’ emailed questions in brief while protesting that our inquiry was unfair. “I don’t think it’s fair to be covering the lawsuit at this point … you’re really only amplifying the arguments of one side. Perhaps you’ll consider holding off until ABC responds formally in a few weeks,” she wrote.

While both Ford and Townsend argued iMediaEthics was “amplifying the arguments of one side,” iMediaEthics notes that we sent ABC News detailed questions about Fox’s claims, but ABC News repeated “no comment” to our multiple questions, therefore refusing to provide its side of the story.

Ford did confirm, however, that the defendants’ deadline to respond to the lawsuit is June 28.

The New York-Presbyterian Hospital allowed ABC News access to two of their campuses to produce NY Med. The series premiered in July of last year and ran for eight episodes, according to a section on the hospital’s website about the show.  Over the course of a year, the series followed patients and staff at two campuses of the New York-Presbyterian hospital, the hospital’s website states.

iMediaEthics asked Townsend if the hospital was paid any compensation for working with ABC News. She responded, “There is no payment, in-kind donation, fee, etc.”

ABC News removed the segment from its website in response to a request from the Chanko family, the Daily News reported. iMediaEthics has not viewed the video. The Chanko family declined through their lawyer to allow us access to the clip.

The Chanko family claims that neither Chanko nor his family had provided consent for ABC News to broadcast the segment in which he appeared. Given the option, Fox told the Daily Mail, Chanko’s wife would not have signed any document granting permission to air the segment.

However, an article in PRWeek claims, “Everybody who appeared on the show signed consent forms. Patients were also made to understand that ABC had sole editorial control over the finished product.”

Fox told iMediaEthics that a New York-Presbyterian privacy officer sent a letter to Ken Chanko, one of the plaintiffs, stating that no one could have recognized Mark Chanko in the footage. iMediaEthics asked to view the letter for verification, but Fox denied our request.

Mark Fox added that Ken Chanko also spoke with New York Presbyterian Hospital attorney Caroline Fox (no relation to Chanko lawyer Fox), who stated that the family should have seen signs posted in the hospital that read, “Filming in progress.” Mark Fox claims that the Chanko family did not see the signs.

iMediaEthics contacted the New York State Department of Health in order to verify Mr. Fox’s claim that the agency is investigating the New York-Presbyterian Hospital’s actions, and we are awaiting a response.

A spokesperson from New York-Presbyterian Hospital declined iMediaEthics’ request for comment on the case.  Efforts to reach the three surgeons named as defendants have yielded no response.