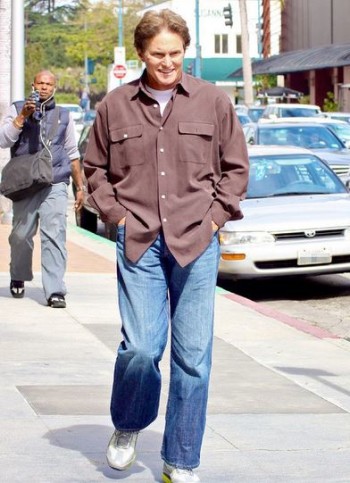 But was there any pay-for-play involved?

iMediaEthics asked ABC News if it made any financial deal with Jenner in order to get an exclusive interview with Jenner. We also asked if there was any arrangement about what questions Sawyer would ask him.

“We do not pay for interviews, and no questions are off limits – for any interview,” ABC News spokesperson Julie Townsend told iMediaEthics by e-mail.

“We don’t license material when booking interviews – that’s been our policy for several years,” she added..

Besides the reported ABC News interview, In Touch magazine got in trouble last month for doctoring a photo of Jenner to show him wearing makeup and a scarf with the headline “My Life as A Woman.”

According to BuzzFeed, In Touch appeared to have edited a picture of Jenner with a photo of British actress Stephanie Beacham.

See below BuzzFeed’s image showing Jenner, Beacham and the In Touch cover.

The In Touch article also claimed that Jenner was going to tell LGBT news site the Advocate that he is a transgender woman. The article said:

“’When Bruce goes public, he wants to go big and come out as a transwoman on the cover of ‘The Advocate,’ the ultimate LGBT magazine,’ the source claims.”

But the Advocate said that is false. “I’m astounded that Bonnie Fuller’s Hollywood Life would claim to have ‘all the details’ on Bruce Jenner’s ‘big magazine plans’ because their story is a total fabrication — like InTouch’s distressing Photoshopped cover,” Matthew Breen, editor in chief of The Advocate is quoted by the Advocate. “Neither publication has any insider source with knowledge of The Advocate‘s planned coverage.”

GLAAD, the Gay and Lesbian Alliance against Defamation, responded to the In Touch Weekly, calling it “invasive” and inappropriate. GLAAD President and CEO Sarah Kate Ellis said in a statement on GLAAD’s website.

“This nonsense has to end. Speculating about a person’s gender identity only inflames the invasive and gross scrutiny that transgender people face every day at school, at work, or even when just walking down the street. It’s long past time that media outlets stop gossiping about Bruce Jenner’s gender.”