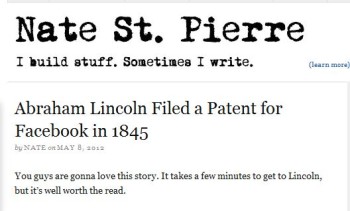 A fake story that circulated online May 8 claimed that Abraham Lincoln “patented the basic idea” for Facebook with a newspaper called The Springfield Gazette, Memeburn reported.

Nate St. Pierre started the story in his blogpost on what he said was his research in the Lincoln Presidential Library & Museum in Springfield, Illinois. St. Pierre claimed that a researcher named Matt at the library showed him “the visual appendix to a patent application” for The Springfield Gazette, a “sheet of paper…all about Lincoln” with “his portrait in the upper left-hand corner.”  St. Pierre wrote that “I wish  I could just show you a picture, but here’s what I remember” of the patent request. He did upload a picture of what he said what The Springfield Gazette “block cover” showing a picture of Lincoln.

However, CNET reported that the Lincoln Presidential Library & Museum’s communications coordinator David Blanchette said, ” We did not meet with [St. Pierre] and no one by the name of Matt works here. Lincoln is the only President to hold a patent, but it was for a device to help riverboats that became stuck on sandbars. That is a far cry from Facebook.”

In an e-mail to iMediaEthics, Blanchette noted that “Lincoln’s patent was unrelated to The Springfield Gazette or anything similar to Facebook.”

Blanchette told iMediaEthics by e-mail that “As far as we know Mr. St. Pierre has not been to our Library to do research; he may have visited the Museum on his own (they are separate buildings) but we have no record of which individuals visit the Museum.”

He called the Lincoln Facebook story “a clever but complete hoax.”  He added: “We hope by exposing it as such it encourages people to discover the real Lincoln at our institution. They can start by visiting www.presidentlincoln.org.”

Discovery News noted that some flaws in St. Pierre’s “cleverly conceived” report included St. Pierre’s claim that the newspaper ran photos, when that wasn’t technologically possible yet.  As Kottke.org explained in an update on its story noting the report is “definitely a hoax.”

“The first non-engraved photograph reproduced in a newspaper was in 1880, 35 years after the Springfield Gazette was allegedly produced” and

“The Library of Congress says that the photograph pictured in the Gazette was taken in 1846 or 1847, a year or two after the publication date. That and the low-res ‘I couldn’t take proper photos of them’ images pretty much convinces me.”

In his original post, Kottke had written “I hope this isn’t a hoax,” but later updated twice to “call hoax on this one.”

It appears Forbes ran a story on the Lincoln hoax but unpublished it. A Google result for stories about the Lincoln Facebook story produced this May 8 story with the headline of “Abraham Lincoln Filed a Patent for a Dead-Tree Facebook in 1845.”  See below a screenshot from May 9 Google results.

The link goes to a dead page, so it appears Forbes unbpublished its report.  SiloBreaker.com republished here the first two paragraphs of the Forbes story indicating that Forbes ran the story as fact.

We have written to Forbes asking when it took down its story and if it has or will publish a correction.

“Technology, business and culture” news site The Next Web also ran a story about St. Pierre’s blogpost, writing that “You can’t make this stuff up, folks.” In an update, the Next Web noted that “Many folks are calling out St. Pierre for fabricating this story, including Jason Kottke.”

ZDNet reported on St. Pierre’s story and later published an apology after learning it is “indeed a hoax.” ZDNet struck through the parts of its blogpost on the claims about Lincoln.

BuzzFeed also wrote about St. Pierre’s story, but posted an update reading, “To be clear, this is a fun hoax-y hoax.”

We have written to St. Pierre seeking more information and will update with any response.

UPDATE: 5/9/2012 2:58 PM EST: Here’s a Google Cache of the Forbes article. Thansk to @Pessimism for sending it to us! Two screenshots below just in case: