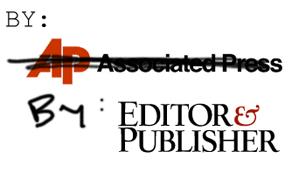 The AP's copyright was violated when E&P accidentally ran the story as their own. The problem stems from AP's policy that at least in some cases allows members to only cite AP's logo. If members were required to use the AP journalists' names, when the AP graphic gets lost, proper sourcing is still given. Several media outlets gave attribution to E&P for the AP article when the AP logo went missing.

While reading the article “More News Sharing Content — Cutting Competition” on Editor and Publisher (E&P), I noticed there was no byline for the story. It was not attributed to an E&P writer or anyone else. A quick search brought me to the exact same article, “Former Newspaper Rivals Cooperate as Jobs are Cut”, written by the AP’s Anick Jesdanun. Yet none of the blogs that commented on the article seemed to know it was an AP article. They point readers to the “Editor and Publisher story.”

I put in a call to E&P Managing Editor Shawn Moynihan, who said “it was not done for any particular reason, it was an oversight.” He apologized and said the correction would be made immediately. I expected the correction to be transparent, considering the article was plagiarized for five days before proper attribution. Instead, Moynihan pasted the AP logo onto the article. There was no editor’s note or correction to advise readers of the initial error.

While it seems the mistake was handled, the problem does not end there. A further search on E&P reveals that the website never uses an AP author’s full byline. Nor do they use it on stories from The Hollywood Reporter. Rather, they paste the logo at the top of the story. This is problematic for two reasons. First, when viewing a story in text format, a viewer may never see the graphic. Second, irrespective of AP policy for members using content, doesn’t a writer deserve his or her full byline when his stories are distributed throughout the web or in print?

I spoke with Gloria Sullivan at the AP about their policy for byline reprinting/re-posting. She said each client has an individual relationship with AP and there is a possibility that in E&P’s contract they have permission to post the logo rather than the author’s name.