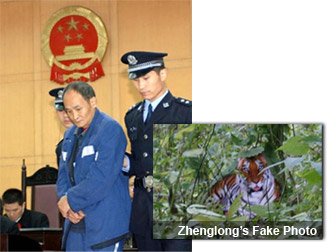 A Chinese judge may be sorry now for showing mercy to the convicted photo forger, Zhou Zhenglong.

Zhou apologized in Court for placing a cardboard image of the rare China tiger in the woods to fake his photos, but he now wrote, after receiving a suspended jail sentence, that the photos were authentic.

Reuters reported, “A saga in China about a farmer nearly jailed over photos he took of a critically endangered tiger that were later judged to be fake has taken a new twist — the photographer now claims the pictures were real.”

They stated, “Zhou Zhenglong, a 54-year-old farmer from a mountainous county in northern Shaanxi province, was awarded a 20,000 yuan ($2,922) bonus last year, after he produced pictures…Zhou, who was given a suspended jail sentence this year for the fraud, has returned to his original claim that he really did photograph a tiger, the official Xinhua news agency said in a report on its website. It published a brief handwritten letter by Zhou describing his first encounter with a tiger in the summer of 2007, which he said he was unable to photograph due to a problem with his camera. He said was only able to take pictures in October of that year.”

Zhou wrote, “I solemnly declare that the tiger picture was real, and was not faked.”  The reversal of his “confession” reopens the scandal for the Chnese government that rocketed throughout the Internet along with other infamous “fauxtography” scandals including the video of fake Olympic fireworks and the fake rare antelope photo.