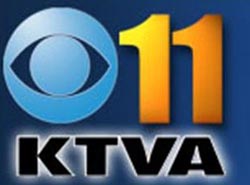 Two reporters from Alaska's KTVA Channel 11 are "no longer with the station" after being recorded discussing child molesters at Joe Miller's rally. (Credit: KTVA)

The journalists — producers from KTVA Channel 11 — accidentally recorded their conversation on the voice mail machine of Miller spokesperson Randy DeSoto after a phone call wasn’t properly disconnected, according to KTVA’s general manager.

While the recording is partially inaudible, after a female reporter says “child molesters,” a male reporter comments “Oh yeah..can you repeat Joe Miller’s … uh .. life of people, campaign workers, which one’s the molester?”

To that, the female reporter says “We know that out of all the people that will show up tonight, at least one of them will be a registered sex offender.”  (See the transcript of the voice mail here on the LA Times website.)

KTVA’s general manager Jerry Bever announced the firings in a Nov. 2 statement that the station had finished its internal inquiry into the incident.   Bever didn’t identify which two producers were “no longer with the station,” but explained that the day’s story assignments “had already been decided” prior to the taped conversation.

“The recorded conversation in question specifically involved how that evening’s Miller rally might be promoted and the ensuing dialogue went downhill from there. These particular comments were not in line with KTVA standards,” Bever is quoted as saying.

Bever had confirmed that “the recording is real,” but denied that claims of conspiring to create fake stories were untrue in an earlier statement.   He had labeled the recording “out of context” and explained that the reporters were discussing “potential ‘what-if’ scenarios” at the rally.

Bever had called the recording “unfortunate because it does not accurately reflect the journalistic standards of our newsroom and the garbled context will no doubt leave more questions than answers.”

“The Miller campaign’s analysis of the recording is incorrect in many material ways ranging from personnel involved in the conversation, the interpretation of conversation snippets and the reported transcript of the perceived garbled conversation,” Bever is quoted as saying.

“The perception that this garbled, out of context recording may leave is unfortunate, but to allege that our staff was discussing or planning to create or fabricate stories regarding candidate Miller is absurd. The complete conversation was about what others might be able to do to cause disruption within the Miller campaign, not what KTVA could do,” Bever concluded.

Sarah Palin weighed in on the recording, calling it a conspiracy on Fox News as it could affect the elections. She tweeted about the incident: “Corrupt bastards. CBS/media plot against Joe Miller before our Anchorage rally Thurs Kinda what I’ve put up w for 2 yrs.”

The Daily Mail noted that KTVA assignment editor Nick McDermott confirmed that the message was affiliated with the network when he “texted DeSoto ‘Damn iPhone… I left you a long message. I thought I hung up. Sorry’.”  However, in the Nov. 2 statement, the station’s general manager clarified that McDermott is still with the station.

CBS News explained in its own report on the story that KTVA isn’t a CBS-owned station.  “KTVA is owned by the Alaska broadcasting company, not CBS. No CBS staffers were involved and CBS has no knowledge of and no comment on these allegations.”

“If journalists are making bad jokes about what they hope to find at a rally, that sounds inappropriate,” American University journalism professor – and former Fox News contributor – Jane Hall is quoted as telling Fox News.

Joe Miller’s campaign was in the news last month for another dust-up with a journalist.  Alaska Dispatch editor Tony Hopfinger was handcuffed and detained by private security guards at one of Miller’s “town hall” meetings.  In response to that incident, Miller’s campaign published a statement titled “Liberal Blogger Loses it at Town Hall Meeting.”

iMediaEthics wrote to KTVA for comment and will update with any response.