Alec Baldwin Is Out at MSNBC, It's a 'Mutual Parting'

Alec Baldwin Is Out at MSNBC, It’s a ‘Mutual Parting’ 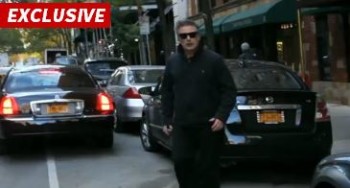 A screenshot of a video of Alec Baldwin confronting a NYPost photographer. (Credit: TMZ, screenshot)

MSNBC just released a statement from Matthew Hiltzik, Alec Baldwin’s representative: “We are jointly confirming that Up Late will not continue on MSNBC, ” according to USA Today.

MSNBC clarified the split is a “mutual parting and we wish Alec all the best.”

The network recently suspended Baldwin’s weekly show, Up Late with Alec Baldwin, after he called a Post photographer taking photos of his family a “c**ks**king f*g” (Baldwin claims he just called the photographer a “c**ks**king fathead).  As iMediaEthics wrote, Baldwin posted an apology statement on MSNBC’s website calling his comments “offensive and unacceptable.”

He later wrote a column for the Huffington Post suggesting the end was near with his show. His column said, in part: “If the show dies, its fate ends up being no different than the vast majority of start-up TV programming, and so be it.” The show premiered in October.

The New York Post reported that Baldwin is “gone,” according to an unnamed “insider at the cable channel.” Baldwin’s spokesperson also confirmed the news, the Post added.

“A spokesman for Baldwin quibbled with the term ‘fired,’ but confirmed, ‘The show is not coming back. He had questions on whether he wanted to continue.'”

In addition to the photographer comments, the Post listed other accusations that Baldwin was problematic at the network, including “demanding a humidifier” and “a separate makeup room” from a woman with cancer.

iMediaEthics has reached out to MSNBC seeking confirmation of the Post‘s report of Baldwin’s firing and the show’s cancellation.

Last week, MSNBC’s Martin Bashir apologized for his “wholly unacceptable” comments calling Sarah Palin a “world class idiot” and a “resident dunce” with a “long-diseased mind.” He also recommended someone “sh*t” in her mouth. This weekend in an appearance on Fox News Sunday, Palin noted what she called “executive hypocrisy” that Bashir hasn’t been publicly reprimanded for his comments whereas Baldwin was, Mediaite reported.
Hat Tip: Michael Calderone

Alec Baldwin Is Out at MSNBC, It’s a ‘Mutual Parting’