Alligator swimming in Texas flood waters is real, but shark is fake - iMediaEthics

Alligator swimming in Texas flood waters is real, but shark is fake 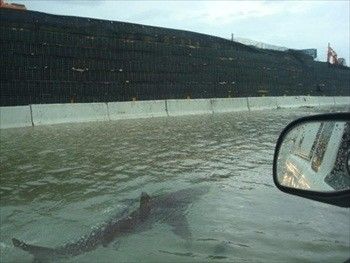 This image of a shark swimming along a car has previously circulated during major storms. But, it is fake

No, a shark wasn’t swimming on a Texas highway as a result of the flooding from Hurricane Harvey. Fox News’ Jesse Watters said on air Aug. 28 that he saw a photograph of the shark on a highway. However, the photo Watters referenced is a fake that was debunked years ago.

“I’ve seen some amazing things out there just looking at television,” Watters said on air. “Alligators on people’s back door steps. I saw a shark on a highway swimming in the water.” Mediaite posted video of his comments, which shows that Fox News didn’t show the photo on air. iMediaEthics wrote to Fox News to ask if Watters will correct the claim on air. After our e-mail was sent, Watters tweeted an apology, which the spokesperson pointed iMediaEthics to.

“Yesterday, I made a comment about a shark in the floodwaters in Texas,” he tweeted. “I sincerely apologize if I caused concern or alarm to anyone. The folks there and beyond are suffering unimaginable hardships. My heart goes out to them.”

Yesterday, I made a comment about a shark in the floodwaters in Texas. I sincerely apologize if I caused concern or alarm to anyone (1/2)

…The folks there and beyond are suffering unimaginable hardships. My heart goes out to them (2/2)

Unlike the shark claim, the alligator tale was a real thing, the Hollywood Reporter noted. The Houston Chronicle posted a video from a woman showing the alligator swimming in her flooded backyard this week.

When major weather happens, fake photos are bound to make the rounds. This is a topic iMediaEthics has covered numerous times before.  That fake shark swimming down a road picture duped blogs, Miami TV news Channel 7, San Diego Channel 6 and the Miami Herald back in 2011 during Hurricane Irene when outlets thought it showed a street in Puerto Rico. 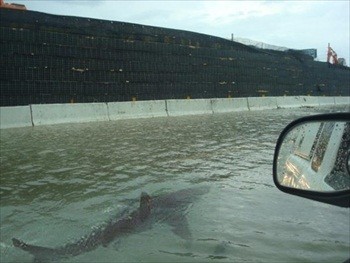 A fake photo purporting to show a shark swimming next to a car.

Then, in 2012, the fake shark street photo was wrongly circulated again, with people thinking it showed Tampa Bay during Tropical Storm Debby, as iMediaEthics wrote at the time.

A different fake shark photo, purporting to show sharks swimming at the bottom of escalators, made the rounds in 2012. That shark photo shows sharks doctored into a photo of Toronto, Canada floods. A “community-submitted post” on BuzzFeed wrongly claimed the photo showed the after-effects of a shark tank that collapsed in Kuwait, iMediaEthics reported. 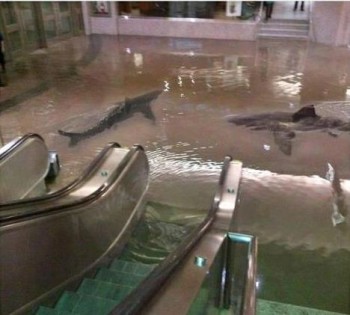 A fake photo of sharks swimming at the bottom of escalators.

Alligator swimming in Texas flood waters is real, but shark is fake