AP Adds ‘Caption Addition’ to Picture of Mitt Romney, ‘Fell Short of Our Own Standards’ 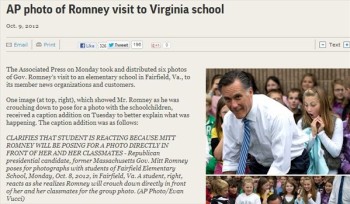 The Associated Press issued a statement about the photo shown above. (Credit: AP, screenshot)

The Associated Press made a “caption addition” that “clarifies” that a girl pictured in the background of an Oct. 8 photo of Mitt Romney looked shocked because “Romney will be posing for a photo directly in front of her and her classmates.”  The photo showed Romney bending over with a group of children behind him. One of the girls is apparently looking at Romney’s back and is “gaping” as Newsbusters described.  Politico noted that the picture in question was “one of six the AP distributed from Romney’s visit to an elementary school.”

According to Politico, the “original caption” simply said “Republican presidential candidate, former Massachusetts Gov. Mitt Romney poses for photographs with students of Fairfield Elementary School, Monday, Oct. 8, 2012, in Fairfield, Va.” See below another photo from the event that helps contextualize what was going on.

When paired with this photo, the photo of the shocked girl is contextualized. (Credit: AP, screenshot)

As the Washington Post’s Erik Wemple explained, Newsbusters and Fox News had previously questioned the photo before the “caption addition.”  Wemple asked in response to the “caption addition” — “Why not a little statement of regret to the candidate for throwing out a photo that makes him look silly, sans explanation?”

Fox News reported that Center for Journalism Ethics at the University of Wisconsin-Madison director Stephen Ward commented that the photo is “not particularly offensive” and “more funny.”  However, he is quoted as saying: “I don’t particularly have a problem with the shot. As long as the caption is fine. My problem is in how people might use it.”

Mediaite, via Romenesko, reported that the Associated Press’ Senior Vice President and Executive Editor Kathleen Carroll called the original caption “too generic” and said it “missed the boat by not explaining exactly what was happening.”

Further, Carroll said in a statement published by the AP’s Director of Media Relations Paul Colford:

“We amended the caption on Tuesday with that explanation, but by then many people had seen the photo and were confused by or angry about it. Those generic captions help us process a large number of photos on a busy campaign day, but some photos demand more explanation and we fell short of our own standards by not providing it in this case.”

iMediaEthics is writing to the Romney campaign for comment and will update with any response.
UPDATE: 10/11/2012 10:30 AM EST: Added photo

AP Adds ‘Caption Addition’ to Picture of Mitt Romney, ‘Fell Short of Our Own Standards’