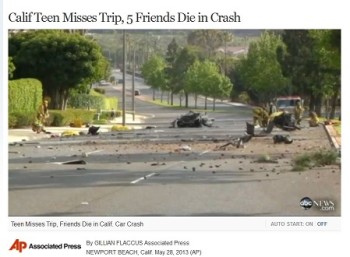 Tragedy struck five teens, and their families, over Memorial Day weekend in a Newport Beach, California car crash.  But why did the Associated Press go to great lengths to describe the two boys’ Arabic-speaking, Middle Eastern immigrant background in its reportage?

The AP described the deceased young men as being

“…part of a larger group of about 10 close friends who were either first- or second-generation immigrants from various Middle Eastern countries.”

And that they “all spoke Arabic together when they hung out, which was constantly.”

The AP reports that the victims were immigrants: Abdulrahman Alyahyan, 17, was from Saudi Arabia and Nozad Al Hamawendi, 17, was from Iraq. The source of this information is their “close friend” Mohamad Abdul Razzak, 16, who “also arrived in the U.S. last year from Lebanon.”  Was this information volunteered or was Razzak asked about their ethnic backgrounds? iMediaEthics is attempting to find out.

The ethinicity of the girls who died in the crash Cecilia Zamora, 17, and sisters Robin Cabrera, 17, and Aurora Cabrera, 16, was not disclosed.

According to surname origin websites both surnames are of Hispanic origin.

Brie Martinez, 15, and Paloma Douglas, a junior in the same school, who were quoted in the article as friends of the deceased girls, were also not identified by their race and ethnicity.  iMediaEthics wonders why the girls’ ethnicity was not included if racial backgrounds are an important part of the overall story?

It is striking that the AP chose to highlight the ethnic background of only some of the victims and only one of their sources. How is the information relevant to the story? AP does not say.

Given the current climate in this country (events like the Boston bombing and hate crimes against Muslims, Arabs and Sikhs) this is ethically questionable and potentially inflammatory. And the climate is only exacerbated when combined with the AP’s description of the two as “obsessed.”

Obsessed is certainly not a positive descriptive. Obsess is defined as to “preoccupy or fill the mind of (someone) continually, intrusively, and to a troubling extent.” Certainly positive words could have been selected by editors or the reporter to describe the recently deceased young men’s hobbies instead of the same word with a negative connotation?

Perhaps Alyahyan took pride in his car, like so many teen boys do, and Hamawendi was an avid or dedicated weight-lifter. In either case, using such descriptions doesn’t suggest anything extraordinary or troubling about their pastimes.

Why did AP single out Arab teens’ background, not others?

When iMediaEthics examined other recent AP articles that covered the deaths of teenagers in car crashes, there are no mentions of the race or ethnicity of any of the victims.

So it is clearly not the AP’s recent practice to describe the race of teenage victims and sources. The AP needs to be held accountable for why it chose to do so in this case.

The AP stylebook says that someone should only be identified by race when it is pertinent to the story. iMediaEthics does not see the importance and has sought comment from the AP. They have not responded.

Examining other media outlets’ coverage of the car crash, such as the Los Angeles Times, you find no mention of anyone’s race or ethnicity. Their descriptions of the boys are also more appropriate.

Alyahyan was said to be “a senior at high-achieving University High School”and Hamawendi was a happy person who “would compliment complete strangers.”

These seem to be more sensitive descriptions for recently and tragically killed teenage boys.

Regardless of their race and ethnic background.