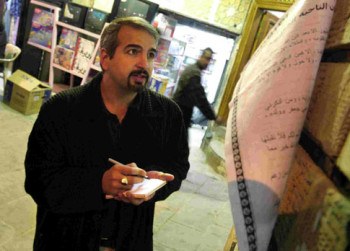 The ethics award is named for Anthony Shadid, a New York Times reporter who was killed while reporting in Syria in 2012. (Credit: Via University of Wisconsin)

The Associated Press won a national journalism ethics award this week for its reporting on Robert Levinson and for postponing its confirmation that Levinson was connected to the CIA three times over three years for concern over his safety.

The University of Wisconsin-Madison’s Center for Journalism Ethics announced the AP’s winning of its 2014 Anthony Shadid Award for Journalism Ethics on March 18. The award goes to “a journalist, or team of journalists, whose reporting on a specific story or series best exemplifies four key criteria: accountability, independence, and commitment to finding truth and to minimizing harm.”

As iMediaEthics wrote last month, the award was expanded to be a national award this year.

Levinson disappeared in Iran in 2007, but the official story was that he was just an American businessman.

The AP’s December 12 story was titled, “Missing American in Iran was on unapproved mission.”  The story reported:

“An American who vanished nearly seven years ago in Iran was working for the CIA on an unapproved intelligence-gathering mission that, when it came to light inside the government, produced one of the most serious scandals in the recent history of the CIA — but all in secret, an Associated Press investigation found.

“The CIA paid Robert Levinson’s family $2.5 million to head off a revealing lawsuit. Three veteran analysts were forced out of the agency and seven others were disciplined.”

The AP’s story explained that it didn’t publish the story back in 2010 when it first found out about Levinson’s background “because the U.S. government said it was pursuing promising leads to get him home.” The AP added that it decided to finally publish because there hadn’t been any progress in finding Levinson.

The award goes to the AP and three staff members, Adam Goldman, Matt Apuzzo, and Ted Bridis, according to the center’s website.

Other news outlets, including the New York Times and ABC News, also decided not to report on Levinson’s CIA work, as iMediaEthics wrote last year. Gawker listed ten times where the two outlets knowingly reported the false information about Levinson being on a business trip.