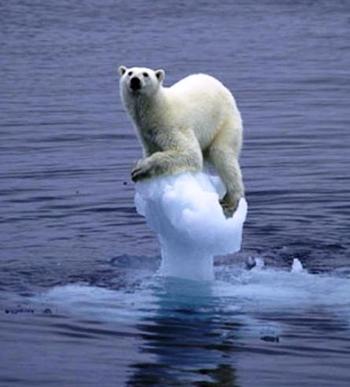 Polar bears aside, a scientist and expert in oceans and climate told Fox News,that "sea level changes" are a "major scare tactic used by the global warming people."

Fox News interviewed multiple scientists that disagreed with the Dec 14th  AP report and cited blatant factual errors. So why were no dissenting views presented in the AP story?  David Deming, a geology professor at the University of Oklahoma told Fox News. “If the issues weren’t so serious and the ramifications so profound, I would have to laugh at it,” he said.

James O’Brien, an emeritus professor at Florida State University, expert in climate variability and the oceans, told Fox News that he “took issue with the AP article’s assertion that melting Arctic ice will cause global sea levels to rise.” “When the Arctic Ocean ice melts, it never raises sea level because floating ice is floating ice, because it’s displacing water,” O’Brien said. “When the ice melts, sea level actually goes down.”

Given the creditable scientific dissent on global warming, how can AP report such a one-sided story? The answer may be found in AP’s new  “accountability journalism.”  AP’s new policy proudly encourages bias instead of balance with multiple sides of a story.

Ron Fournier, AP Washington Bureau Chief,  advised AP writers, “Don’t give equal weight to spin. Just because a public official says it doesn’t mean you need to put it in your story or give his claim equal billing to what you know to be true. We have an obligation to write factual and fair stories, but we are not obliged to print attacks, spin or distortion under the cover of ‘fair comment.’ “

Running afoul of ethical journalism practice, AP’s new “accountability journalism” means that AP is no longer accountable for publishing one-sided reports. Ice caps? What about the meltdown of media ethics at AP?