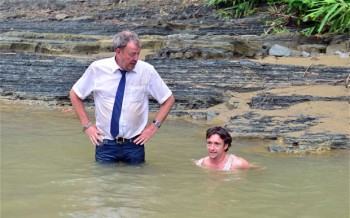 A still from Top Gear's episode in Burma.

Two complaints were filed over the segment.

The program aired March 16 on BBC 2 and showed hosts Clarkson, Richard Hammond and James May building “a makeshift bridge over the River Kwai in Thailand.”

During the program, the men were looking at the bridge on which an Asian man was walking, OfCom’s report said.

Clarkson: “That is a proud moment … but … there is a slope on it.”
Hammond: “You are right … [pointing] … it is definitely higher on that side.”
Clarkson: “We decide to ignore the slope and move onto the opening ceremony.””

See the clip in question

“Slope” is “an offensive and pejorative term for a person of East Asian descent, which originated during the Vietnam War,” OfCom explained.

The BBC defended the use of the term as “an offensive, humorous play on words, addressed at the building quality of a bridge which the team had constructed and a local Asian man who was crossing it.”

The BBC admitted the show was aware the term “could be used to refer to people of Asian origin,” and defended it as “mere slang.” It also pointed out that it apologized when the program aired.

Top Gear, a show about cars, is the “most watched ‘factual’ programme” according to Business Insider.

In April, after the program aired, the BBC had said:

“When we used the word ‘slope’ in the recent Top Gear Burma Special it was a light-hearted word play joke referencing both the build quality of the bridge and the local Asian man who was crossing it.

“We were not aware at the time, and it has subsequently been brought to our attention, that the word ‘slope’ is considered by some to be offensive and although it might not be widely recognised in the UK, we appreciate that it can be considered offensive to some here and overseas, for example in Australia and the USA.

“If we had known that at the time we would not have broadcast the word in this context and regret any offence caused.”

OfCom ruled that “slope” is “a pejorative racial term which has the potential to be offensive to Asian people specifically, as well as to viewers more generally.”

Even though Top Gear “is widely known for its irreverent style and sometimes outspoken humour,” OfCom decided Clarkson “deliberately” was calling the man “slope.”

Further, OfCom pointed out that the “slope” conversation was scripted.

“There was clearly an opportunity both during filming and post-production to research the word and reach a more considered view on whether it was “mere slang” and had the potential to cause offence to viewers,” OfCom wrote.

“We dealt with this matter some time ago, the programme apologised at the time and explained the context, and we are now focusing on delivering another series of one of Britain’s best-loved shows.”

Clarkson was “put on final warning by the BBC earlier this year” for using the n-word in leaked footage, the Guardian reported.

In 2011, viewers complained after Clarkson joked about Indian food, toilets and so on.

The BBC apologized in 2011 after the BBC received more than 20,000 complaints over his comments saying public sector workers on strike should be shot.