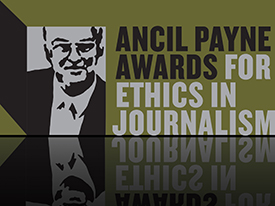 Both the Associated Press’s coverage of “seafood slaves” and the Las Vegas Review-Journal‘s investigative reporting on itself and the purchase of the newspaper required reporters to handle difficult ethical issues.

The University of Oregon’s School of Journalism and Communication is giving the two outlets its 16th annual Ancil Payne Award for Ethics in Journalism and $5,000 later this month. The award “recognizes ethical practice and decisions that demonstrate courage and integrity,” the school’s press release on the award said.

The Associated Press’s reporting and steps to protect its sources have already earned the wire service major recognition, including earlier this week, a Pulitzer Prize for Public Service. As iMediaEthics previously reported, the AP won the Anthony Shadid award for ethical journalism from the University of Wisconsin’s Center for Journalism Ethics. The AP’s reporting led to thousands of slave laborers in Southeast Asia being freed and the AP helped rescue its sources so they wouldn’t be harmed or killed in retaliation for going public.

The Las Vegas Review-Journal reporters honored “fought for transparency by reporting the secret sale of the newspaper despite management’s warnings to stay away from the story,” the press release explains. “When the newsroom’s  reporting turned up a trail of egregious business and ethics violations tied to Las Vegas casino owner Sheldon Adelson, the journalists focused on their professional obligation to readers and published the story. As a result, the Nevada Gaming Control Board is now monitoring Adelson’s use of the newspaper.”

The reporters honored are:

“Somewhere in the world right now a journalist is wondering if he should go along to get ahead or if he should do the right thing no matter the personal cost,” James G. Wright, deputy editor of the Review-Journal, said in the press release. “This particular award honors the journalists of the Review-Journal, but it is really for everyone who chooses to do the right thing.”

The award ceremony is April 28.

iMediaEthics has written to the Review-Journal, the AP and the university for further comment.