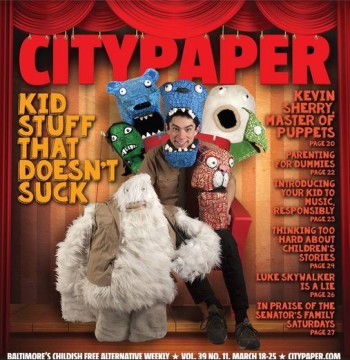 The Baltimore City Paper axed a comic strip of 15 years, entitled Maakies, and its cartoonist because of its offensiveness.

The paper’s editor, Evan Serpick, explained to readers the decision after the cartoonist Tony Millionaire posted “dozens of tweets lashing out at City Paper and me as editor.”

Serpick told iMediaEthics that “the reaction from our regular readers has been mostly positive.”

Originally the column and its “transgressive humor was refreshing” but now Serpick said the paper decided to drop the column because it became repetitive and misogynistic, he argued, comparing the cartoonist to Twitter trolls. “In short, Millionaire’s wit was at about the same level as one of our Twitter trolls,” Serpick explained.

However, despite not particularly liking the column, Serpick said “I never really thought about canning the comic” until earlier this year. Two cartoons prompted the decision — first a January cartoon that joked about alcoholism and domestic violence, and finally this past week’s column that joked about women’s periods.

“Maybe he was trying to mock this kind of misogyny, but however much irony was intended, repeating these sorts of jokes reinforces the idea that that sort of behavior or attitude is OK. There are ways to make jokes about serious issues that don’t dehumanize victims or belittle an issue, but Millionaire instead resorted to lazy ‘humor’ and hides behind the tired, empty defense that it was “just a joke.'” Serpick wrote of the January comic. This is the full comic in question.

While “most of the staff was ready to can” the cartoon then, the paper decided against it until the cartoon went too far again this week. That cartoon shows a man wanting to file for divorce because his wife is on her period.

“I sent it around to the staff, suggesting that we finally can ‘Maakies.’ Everyone who responded agreed,” Serpick wrote. A female employee told Serpick the cartoon was “straight-up just making fun of women for being women.”

Sperick said he then told Millionaire they were cutting the cartoon because it had become offensive and “we didn’t like it anymore.”

“Even if this punching-down humor, in which women are continually the butt of jokes, isn’t ‘offensive,’ it’s old-fashioned and stupid and should be viewed with the same disdain most of us now have toward racist or homophobic jokes. And again, if these are more jokes about these kinds of offensive jokes, that kind of ironic sexism, like ironic racism, also feels very out of touch.”

Serpick said the cartoon didn’t fit with the paper and what it has become.

Despite Serpick’s comments and the City Paper’s decision, Millionaire stands by his work.  “My strip has never been about misogyny or any kind of hatred. It’s about the absurdity of humans, humor, and the horror of being alive,” Millionaire told iMediaEthics. “I resent the insult from Mr. Serpick.”

iMediaEthics asked Millionaire where else his comic strip runs. He said it has run in numerous alt-weeklies around the country and “now runs in The Portland Mercury, Austin Chronicle, and The Rumpus online.”

“Maakies deals quite a bit with depression, alcoholism, and violent behavior,” Millionaire noted. He added that “The humor is often based on human weaknesses and deficiencies.”

Millionaire argued: “Far from encouraging hateful behavior, Maakies functions as a forum for finding the shame, awareness, and the humor in defeatist behavior, it helps people realize that we all have weaknesses, and talking about them in a neutral, nonjudgmental, humorous way helps, it really helps. Maakies has been running for 20 years, since 1994, and I am proud of it, despite the inevitable misunderstanding of its intent.”

Even after the column, the cartoonist has tweeted critically of the paper’s editor. Millionaire “took to Twitter with dozens of tweets lashing out at City Paper and me as editor, quoting from my email to him, calling the staff “idiots” and “cunts” and asking me, “You on the rag now?'” Serpick wrote.

From @Serps a lot of the staff (myself included) have found some recent comics offensive, including this one. REALLY? pic.twitter.com/1Frf06dX3K