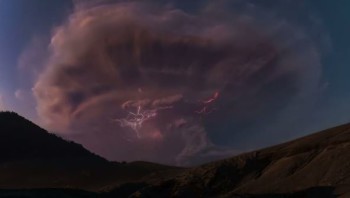 The BBC apologized after not disclosing an image of a Chilean volcano was from a composite image taken over four years, the Independent reported.

The footage was used in the BBC program  Patagonia: Earth’s Secret Paradise, according to the Guardian.

The BBC told iMediaEthics by e-mail:

“In order to show viewers the extraordinary spectacle of a dirty thunderstorm with lightning flashes that would be impossible to capture in a single camera, a composite image was put together from footage from two Patagonian volcanoes. However, we recognise that this should have been made clear and so have published a blog post to explain the techniques used.”

In its own Oct. 4 article about the photo trickery, the BBC said the composite image pulled together two volcanoes, one from 2011 and one from 2015.

The BBC also pointed us to its Oct. 2 article on photographing the volcanoes explained:

“While these events happen naturally, they can be difficult to see with the naked eye or be captured on a single camera. It requires special techniques to reveal and portray their true extraordinary nature.”

“So, alongside local cameramen, the BBC Earth crew recorded the Calbuco eruption on multiple cameras in timelapse and ultra high definition (UHD). It was an amazing eruption that made world news, and put on a supreme volcanic lightning show. Our aim was to represent the stunning visual spectacle of an eruption,” the BBC added.

The BBC went on: “Timelapse photography compresses time to show how the ash cloud builds and spreads very dramatically over many hours, but lightning is difficult to record using timelapse photography,as this footage of the Calbuco eruption reveals….These elements had to be combined to create a series of composite images, showing both the size and scale of a Patagonian volcanic eruption, its ash cloud and the repeated strikes of lightning that can occur within it, over many hours.”