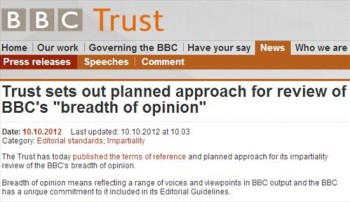 The BBC Trust has asked “former ITV chief executive” Stuart Prebble to review the broadcaster’s “coverage of religion, immigration and Europe,” according to The Guardian.

The Guardian noted that the review was “announced in August” and, according to the BBC Trust’s chairman Lord Patten, is in response to impartiality accusations.  In an August 2 press release from the BBC Trust, the Trust wrote that

“Previous impartiality reviews have looked at the BBC’s coverage of business (published 2007); network news and current affairs coverage of the UK nations (2008); science (2011) and coverage of the events known as the ‘Arab Spring’ (2012). “

Patten is quoted as saying at the Broadcasting Press Guild: “The subjects we thought we would cover, because they are subjects we have had criticism from time to time about breadth of voice issues, are Europe, immigration and religion…We’ve been criticised in those areas and we think it’s very important to listen to that criticism, not necessarily because it’s right but because it reflects real and interesting concerns.”

Among the questions include “whether the BBC gives due weight to a range of opinions,” “whether editorial decisions to include or omit certain perspectives” are acceptable, and more.  The review, which is to be published next year, will be a “content analysis” of reporting from 2007 to 2012 and 2013, according to the BBC’s October 10 press release on the review.

According to The Guardian, this is the “fifth impartiality review.”  The BBC Trust’s 2007 review by John Bridcut, “From Seesaw to Wagon Wheel: Safeguarding impartiality in the 21st Century,” explained it was to “define a set of principles of impartiality in a forward-looking way” and “identify a list of broad implications for the BBC.”

iMediaEthics is writing to the BBC for more information about the review and will update with any response.

iMediaEthics has written about the BBC several times recently.  In August, the BBC apologized for saying Olympic boxer Luke Campbell’s mother and sister were dead when they aren’t. Also that month, a BBC weatherman, Phillip Avery, apologized for a bad weather forecast.  In late September, the BBC apologized after reporting on a “private conversation” with the Queen.  The BBC called  the incident a “breach of confidence.” In early October, the BBC apologized for accidentally airing “not-for-broadcast audio” including the f-word.  The BBC Trust also recently described host Jeremy Clarkson’s comment comparing a “Prius car/caper van hybrid to ‘people with growths on their faces'” as “offensive” and a “regrettable lapse of editorial judgment.”  Check out all of iMediaEthics’ reports on the BBC.