Be Like TIME Mag & Make You Own Tilt-Shift Effects Photos...Just don't call it photojournalism 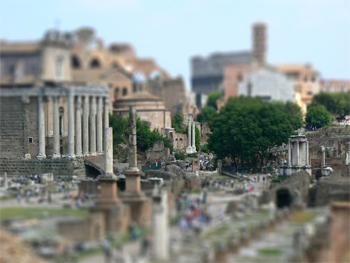 IT'S REALLY ROME! IT ONLY LOOKS LIKE A SCENE FROM A TOY TRAIN SET-UP. The image above was created on the Tilt-Shift Maker web site and is found on its site. No need for expensive, specialized equipment. You can instantly transform your regular photos into tilt-shift miniatures with a simple three step process. (Credit: Dode_Balfour)

Here is a site, “Tilt-Shift Maker, Discover the World in Miniature” where you can upload your own photos and instantly transform them into tilt-shift effect images.

“Tilt-shift miniature faking” is defined in Wikipedia as “a process in which a photograph of a life-size location or object is manipulated so that it looks like a photograph of a miniature scale model. By distorting the focus of the photo, the artist simulates the shallow depth of field normally encountered with macro lenses making the scene seem much smaller than it actually is.”

By taking your own images and converting them to miniatures, imediaethics believes the public will better understand why photojournalism has no business using this special optical effects distortion without proper caption disclosures.

For background: imediaethics recently reported on TIME magazine’s recent adoption of tilt-shift photographic special effects images by a TIME/Corbis photographer. We specifically criticized editors undisclosed use of tilt-shift’s image distortions to make editorial points–such as literally making Obama look small by tilt shift fakery in an image for an article about how congress may be overwhelming the President (thus making his power small). We have argued this use of tilt-shift optics is editorial illustration–not news photography–and should be labeled as such.

For those wanting to understand more about tilt-shift imagery, and are seeking an inexpensive and quick way to try it yourself, definitely give the Tilt-Shift Maker site a whirl. The Photo Gallery shows many examples of images converted from normal imagery to suddenly possessing an instant tilt-shift effect.

The site offers a fun alternative, to spending big bucks for specialized tilt-shift lens and equipment. It employs a simple three-step process that starts with the uploading of your image. The site also offers practical hints such as:”Tilt-shift miniatures often look better with vivid colors.” Wikipedia offers further suggestions: “Many miniature faked photographs are taken from a high angle to further simulate the effect of looking down on a miniature. Objects oriented horizontally [like landscapes, clarification mine].. make better subjects for tilt-shift miniature faking than vertically oriented objects.”

hame@ca writes: “This is a page of links to information about tilt/shift photography and to galleries of photographers who use t/s in their work.  Tilt-shift photography as it applies to creating a ‘toy-train-set’ effect in scenery is catching on all over the world (mostly via flickr, the online photo sharing community) so I felt it would be a good idea to collect as much information about the technology as possible so people can find equipment and inspiration easily.  If you’ve found some information or a gallery of images that isn’t listed here, please let me know.” hame@ca includes a link to a tilt-shift Frickr group with 1,623 members.

Another site, “50 Beautiful Examples Of Tilt-Shift Photgraphy” offers very high-end, professional titl-shift images that relied on specialized equipment and techniques, unlike the Tilt-Shift Maker’s more crude results. You will hardly believe your eyes, or feel convinced that these images are of real scenes instead of toy-like models. (Hat tip: Robert Slawinski).