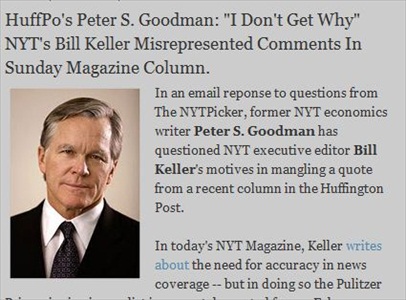 A recent column by New York Times executive editor Bill Keller’ for NYT Magazine has been criticized for a clear factual error and for misrepresenting comments made by a former Times staffer.

Within days of Keller’s column being published, the Times published a correction, noting that Keller mistakenly identified activist James O’Keefe as one of the people involved as a “potential donor” in the recent sting of NPR that led to two executives leaving the public media outlet .

One reader, John McQuaid, sent an error notice to Media Bugs, noting that Keller conflated O’Keefe’s roles in the ACORN sting and the NPR sting.  In the secret video taping in ACORN offices, O’Keefe was active in the sting.  But, in the NPR taping, O’Keefe was not on camera or at the NPR meeting. But, his website Project Veritas did put the video out.

The March 25 column by Keller questioned if O’Keefe and WikiLeaks’ Julian Assange are “split personalities of the same guy — sent by fate to mess with the heads of mainstream journalists.”  Keller went on to discuss the differences between traditional journalists and “agenda-driven journalists of the right and the left.”  He asserted the Times’ vigilance in correcting any mistakes it makes and the Times’ goal of being “impartial” and “agnostic” to stories.

He also explained that the Times doesn’t include “equal weight to every point of view, no matter how far-fetched.”

Keller wrote in his column “This does not mean — as one writer recently scoffed — that we ‘poll people at both extremes of any issue, then paint a line down the middle and point to it as reality.”  That writer is Goodman, who is currently the Huffington Post’s business and technology editor.

The source for Keller’s “scoff” is a February column by Goodman for the Huffington Post in which he wrote he wanted his Huffington Post “reporters to reject the false idea that you simply poll people at both extremes of any issue, then paint a line down the middle and point to it as reality.”

NYTPicker included Goodman’s e-mail to the NYTPicker about Keller’s comments, in which Goodman commented: “I’m not sure why [Keller] construed my sentence as a ‘scoff.’  I don’t get why he apparently took it as being about the Times, when I was speaking much more generally about a troubling default mode in contemporary journalism.”

“I was simply saying that I think it’s crucial that journalists report impartially, insofar as we start our inquiry without being beholden to any particular interest, but equally that we then write it as we see it, without fretting over how readers will see us. I was in particular criticizing the tendency in many publications to insert mentions of bogus contentions as a means of inoculating themselves against claims that they are staking out a clear position.”

MediaBistro’s Fishbowl NY took Keller’s comments as proof that Keller is “still after Huffington Post.” Keller and Huffington went back and forth in March, with Keller criticizing Huffington’s site in a column and Huffington countering in a blog post.