Black Eye for NBC: Military expert had Conflict of Interest 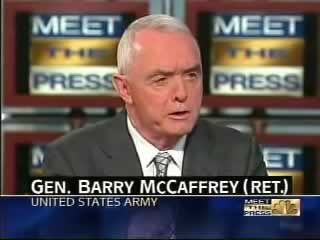 The General was commenting on the war for all GE media properties: CNBC, NBC and MSNBC.Yet no one advised the public that like GE, the General was also profiting from the war efforts.

Professional organizations are not generally known for sticking their necks out to slam members who run foul of ethics. One major organization’s in-house lawyer recently informed me that groups are specifically advised by counsel to not make statements to avoid potential law suits. With that said, the recent high profile stance taken by The Society of Professional Journalists (SPJ) is all the more admirable in a climate that desperately needs ethics warriors to speak out –and loudly.

Inside Cable News web site reported that SPJ sent out a press release that called “on NBC News President Steve Capus and NBC Nightly News Managing Editor Brian Williams to sever the network’s relationship with retired Gen. Barry McCaffrey to re-establish the integrity of its reporting on military-related issues, including the war in Iraq.”

Gen. McCaffrey has been commenting about the war for NBC, CNBC and MSNBC for many years. However, unbeknownst to the public was that McCaffrey was making money from the war itself. SPJ wrote, “What the networks have failed to tell viewers is that McCaffrey has a financial interest in the war. His firm has earned millions of dollars in consulting fees from defense-oriented companies.”

SPJ continued, ” ‘ By failing to be forthright and transparent, these networks ­ which are owned by General Electric, a leading defense contractor ­ are giving the public powerful reasons to be skeptical about their neutrality and credibility,’ said Andy Schotz, the chairman of SPJ’s Ethics Committee.”

“The SPJ Code of Ethics advises journalists ‘to be free of any interest other than the public’s right to know.’ NBC has failed to hold itself to that standard by relying on McCaffrey in its reporting without revealing his connections. This failure is a grievous violation of one of the most basic tenets of journalism ethics.”  Go to SPJ’s Code of Ethics .

Black Eye for NBC: Military expert had Conflict of Interest