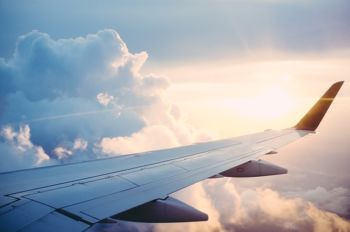 Bloomberg’s report that flight records showed Pres. Donald Trump had stayed overnight in Russia during his 2013 trip for the Miss Universe pageant made waves last week.

While the report received a great deal of attention, with numerous news outlets reporting on its findings, what hasn’t gotten as much notice is a correction Bloomberg appended to its article.

The correction from Bloomberg reads, “A previous version of this story was corrected to reflect that the flight data firm erroneously provided a time of landing in Moscow that was the same as departure from North Carolina.”

Flight Aware spokesperson Sara Orsi told iMediaEthics, “The data referenced in that Bloomberg story was not obtained through our typical media info process” so she couldn’t comment on it. That said, she added, it was “misleading to say we erroneously provided data.” We asked Bloomberg about this and if they fact checked their findings from the data with FlightAware before publication; we haven’t heard back.

Bloomberg bought the flight data from Flight Aware for the plane of Trump’s business partner Phil Ruffin the weekend of the Miss Universe pageant. That was the plane that carried Trump to Russia, according to The New York Times which previously reported that Trump used Ruffin’s plane for the Russia flight.  The length of Trump’s stay was in the news because former FBI director James Comey said Trump told him he hadn’t spent a night in Russia, making allegations in the Russia dossier impossible.

The correction explains that Bloomberg originally said that the plane Trump used to fly to Russia landed in Moscow Nov. 8 at 6:15 a.m. Moscow-time. However, that was  the timethe plane left Asheville, North Carolina (Nov. 7 at 9:15 p.m. Eastern time).

As such, Bloomberg’s corrected reporting says that the plane landed in Moscow Nov. 8 “at a time unspecified,” and he departed on Nov. 10 at 3:58 a.m., landing at Newark airport at 4:11 a.m.

It appears, based on timestamps on the article, that the correction was posted about two and a half hours after publication.

iMediaEthics wrote to Bloomberg to ask how the error occurred and how Bloomberg learned of it; Bloomberg pointed to its correction, which stated that the flight data firm gave incorrect information, and declined to comment beyond that.

Some news outlets that reported on the Bloomberg report, such as the Independent and Salon, lucked out and didn’t cite the times Bloomberg in the initial report. They only reported generally on the flight records, thus avoiding a repeat of the error.

Bloomberg was not the only outlet to have a fact-check fail; many news outlets had a duty to fact check with Bloomberg’s source or risk repeating an error in their headlines and stories, which is exactly what happened!

Others cited the specific times and, therefore, their articles that were based on Bloomberg’s reporting were inaccurate. For example, Business Insider reported, “Flight records show that the plane President Donald Trump used to fly to Moscow in 2013 spent nearly 48 hours in the city.” Business Insider added the specific, inaccurate time, that the plane landed in Moscow at 6:15 a.m. Nov. 8.

The Washington Post changed its headline and added a note at the bottom of its story that reads:

“* Flight records obtained by Bloomberg initially listed 6:15 a.m. Friday is the landing time, but that is actually the same as the departure time from Asheville (adjusted for time zones). The Bloomberg story has been corrected. Politico is also now reporting, based on flight records, that Trump’s plane landed in Moscow on Friday and departed early Sunday morning.”