Bradley Manning's Trial for Leaking to WikiLeaks Started this Week 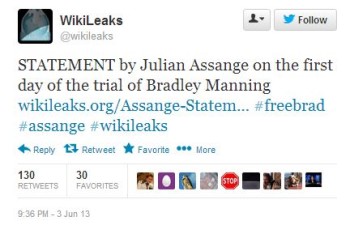 Bradley Manning’s trial began Monday. Manning is the U.S. Army soldier who admitted earlier this year that he provided hundreds of thousands of leaked documents to WikiLeaks back in 2010.

As iMediaEthics wrote in February, Manning said he gave WikiLeaks the documents that made up WikiLeaks’ publications of the Afghan War Diaries, the Iraq War Diaries and the video WikiLeaks titled Collateral Murder.

The New York Times noted that while Manning did plead guilty to ten charges related to the leaks, his trial will address “20 more serious offenses” and Manning might end up with life in prison. The Times explained:

“His plea was not part of any deal and prosecutors are going to trial because they hope to convict him, based on essentially the same facts, of 20 more serious offenses — including espionage and and aiding the enemy — that could result in a life sentence.”

For more updates on the legal proceedings, the Guardian‘s Ed Pilkington is live tweeting Manning’s trial.