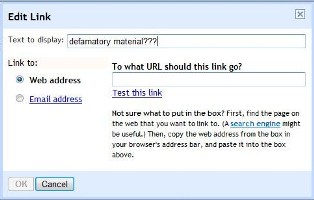 With Google trying to dodge censorship in China, the Australian government planning to secretly ban a list of Web sites, and the British press association holding some blogs to journalistic standards, what is or isn’t OK to post on news and media Web sites seems to be up for grabs lately.

Jon Newton posted in 2006 on his news Web site, p2pnet, an article with hyperlinks to other articles which allegedly defamed   Wayne Crookes, a Vancouver businessman and Green Party volunteer, The London Free Press reported.

According to All Headline News, “Crookes claimed he was defamed by four articles on the Internet on the Web sites of www.openpolitics.ca and www.usgovernetics.com, which were eventually linked to the portal www.p2pnet.net owned by Jon Newton.”

The four articles critical of Crookes – “Wayne Crookes,” “Friends of Crookes, “Gang of Crookes,” and “Wayne Crookes” – are not available online anymore, but p2pnet wrote that Crookes considered them part of a “smear campaign.”  The first three were on Open Politics, a political wiki page, and have since been removed.  The last was on US Governetics, which is no longer a valid Web site.

Crookes wanted the hyperlinks removed, Newton refused, and Crookes took the issue to court. As The London Free Press blogged,  the appeals court said  that running a hyperlink isn’t the same as publishing, and if there’s no publication, there’s no defamation.

As The London Free Press blogged, “The court noted there was a barrier between the article and the hyperlinked websites that had to be bridged by the reader. The court of appeal’s view was in such a situation, the reader leaves the original article and enters a different, and independent, website.”

Newton wrote in an e-mail to StinkyJournalism that the case will probably be heard at the end of this year or next, but that no date has been set.

The Canadian Press reported that  David Fewer, director of the Canadian Internet Policy and Public Interest Clinic at the University of Ottawa said that if linking to a Web site attaches responsibility for that Web site’s content, “you can just imagine the chilling effect that would have.”

The Montreal Gazette reported that Michael Geist, a University of Ottawa law professor who specializes in the Internet, said “The notion that someone might be considered a publisher merely by linking to someone else’s content, I think could have a potentially huge chilling effect and, for that reason alone, is going to have a major impact on the shape of the Internet in Canada.”

“Crookes had launched several libel actions against members of the Green Party of Canada, Google, Myspace.com and Wikipedia,” The Canadian Press reported.

Newton wrote in an article on p2pnet, the Web site being sued, that:

“Without links, the net would literally disintegrate. Without them, Google, Yahoo, et al, would immediately be out of business, anybody or anything which depends on being able to quickly find information would suddenly find themselves back in the era when manual searches taking days and weeks were the only way to ferret out information.
Governments and their agencies wouldn’t be able to function. Companies would have to rely on internal links, and there’d also be massive copyright issues: if you’re publishing when you’re linking.”

The Montreal Gazette reported that  Geist “noted that a 14-year-old law in the United States grants immunity for hyperlinks” and that he suggested Canada adopt similar rules.

StinkyJournalism has contacted Open Politics and will post any response.

UPDATE: 04/11/10 10:41 EST: Michael Pilling of Open Politics wrote in an e-mail to StinkyJournalism regarding the contents of the three articles posted on Open Politics considered to be defamatory:  “The remarks were written in the context of a political faction fight. Lots of nasty things get said in such squabbles, by both sides. All the details of the backstory are in ‘GPC council crisis’ which is available to the public. This page has never been challenged by Crookes, because even though it is a rather damning account of the management of the party during his time as party boss, it sticks to the facts.”

The page Pilling referenced is available on Open Politics.